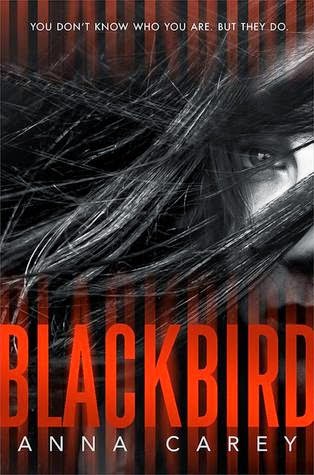 First, thanks to HarperTeen and Edelweiss for allowing me to read an e-galley of this title.  For a little while today I was afraid I wouldn't get to finish the e-galley.  I set my Nook down to take my dogs outside. When I came back in and picked my Nook back up, the file was gone from my Bluefire Reader App.  But, eventually I figured it had to still be on my Nook somewhere, even if it was expired.  So I typed into the search bar and found it.  And opened it and got right back into reading it.  I only had about 60 pages left, less by the time I finished and the last 5 or so pages were acknowledgements, etc.

The story is about a girl, we don't know her name, but she decides to tell a boy who asks that her name is Sunny.  So that is what she goes by.  The boy is Ben and she meets him in a grocery store, right after she first wakes up in the subway station.  She wakes up on the tracks, her feet tangled up in a backpack, very weak and not able to move easily.  The train does go over her, even as it is stopping, but she is able to stay low enough to the ground to not really be hurt.  She doesn't know who she is, and she finds a note in her backpack that says not to talk to the police, and gives her a phone number to call.  So she takes off.  It is on the run that she meets Ben, who offers to help her.  But she doesn't know him, and knows that she must stay off the radar.  The phone number leads her to a place that has just been robbed.  And now she is wanted for that.  She soon figures out there is a tracker in her backpack and she leaves it in a park in the exact same spot for two days, trying to draw in and trap whoever is tracking her.  It works, but the man who says his name is Ivan isn't really the bad guy she thought he was.  He had saved her earlier from a woman who had been going to shoot her.  And he ends up getting taken by two other mysterious guys, and now Sunny is worried for his safety.  As she tries to figure out who she is, while keeping two steps ahead of the cops and the others looking for her, she begins to have memories.  Of a funeral, of a boy, in a forest, of being chased.  She soon realizes, with Ben's help, that she is being hunted as part of a game.  Where people hunt other people.  And she learns something about an island that she must have begun being hunted on.  She seems to have a friend in Ben, but she doesn't want him to get hurt along the way.  Also, a girl staying next door to Ben is Izzy, and they kind of become friends, even though Sunny can't tell her anything.

Of course it all is part of an adventure, and knowing this will have a second part, of course there were also many things left hanging. While we've learned basically what is going on with Sunny, and who these people chasing her are, we don't know exactly "who" she really is.  There are things about Ben that we still need to know, and who the boy from the island really is.  Also, what funeral was she at? And will she be able to escape with her life and bring this human hunting ring down?

This was definitely a good story, and it was getting really good when I had the scare of possibly the file being gone.  But I'm not sure how I feel about the story being told in 2nd person.  All of Sunny's parts are told in 2nd person.  It feels a bit like reading one of those Choose Your Own Adventure books.  Definitely a new way to read, or unusual if not new I guess.  And once I got into it, the "you" bit didn't trip me up as much as it did at first.  Actually I think this is a great book, one that English teachers could totally use to show examples of what 2nd person means.
Posted by Lisa Mandina at 8:00 AM