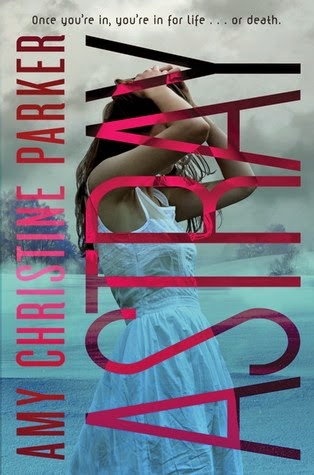 Thanks once again to Random House for Young Readers as well as Edelweiss for allowing me to read an e-galley of the next book in this series.  Although I'm sure it is the conclusion, not really needing another book.  I gave this one a 5 star rating on Goodreads, although looking back, I'm not quite sure why I didn't give the first one, Gated, 5 stars, as I remember thinking it was a very originally told story.  Although there was one thing that bugged me, although I don't know if I mentioned it in my review of the first book. It was the name, Mandrodage Meadows.  Mandrodage is just hard to say and my mind tripped over reading it every time.  But anyway, I thought the first book was really good, and it didn't need a sequel.  So I was unsure about this one. But then I picked it up, and it was such a great sequel, and I could see that Lyla did need more to be done in order to finish her story.  Some spoilers of course, so if you haven't read the first one yet, you should probably go read my review with the link above.

We ended the last book with Lyla running away from the Community and her family after their leader Pioneer seemed to kind of go crazy, including killing her friend Marie right in front of Lyla.  After the big shoot out and confrontation at Mandrodage Meadows, when to get away Lyla had to shoot Pioneer, all the children were taken away and moved to foster homes, Lyla being moved to the Sheriff's house with her new friend Cody.  Eventually the Community, after counseling and meetings with officers were allowed to have their children back, and they moved into another place with trailers.  They were helped out by a group of militants who are about making sure the government doesn't take away people's rights.  But now all the kids are required to go to the public school.  And Lyla chose not to go back with her parents, doesn't even want to visit them after her first visit to the trailer when she sees just how far they've fallen back under Pioneer's spell, even with him in jail.  A man like Pioneer still has ways in jail to get into Lyla's life and make her scared, to tell her she still belongs to him, she is his "Little Owl". Scary things begin happening to Lyla, she can tell she is being watched by someone from the Community.  And all her old friends do crazy things at school, like chanting their strange sayings in the middle of classes, and they shave their heads to support Pioneer with his shaved head, even the girls do it.  When the trial begins things will start happening around the town, making Lyla wonder if maybe Pioneer's predictions are right, and she sometimes doubts if what she remembers is real, or if what Pioneer says happened to Marie is the truth.

It will all come to a conclusion, with Lyla, her old friends, and even her parents, having to find out and choose what is the truth about this Community, and what kind of a man is Pioneer, and is he really getting help from some aliens that they call the Brethren.

I just have to say it was a very realistic and attention grabbing ending to the story.  Even when I was saying out loud that Lyla shouldn't doubt things, and being shocked at what types of things these people following Pioneer would do, I couldn't put the book down.  Such a compelling story.  One that I would guess is similar to what someone who has actually been part of a cult and escaped would probably recognize.  And the way they reacted to the outside world again seems just like examples of the same situations we've seen in the news.  The emotions of Lyla, and even of those who follow Pioneer almost blindly are so potent and grab you to keep you involved in the story.  A great series, that I intend to make sure is in the library where I work.
Posted by Lisa Mandina at 9:00 AM