September is for Sequels Giveaway Hop 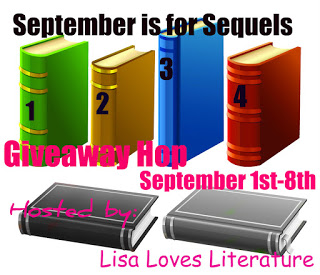 Here we go, another September, another Sequels Challenge and Giveaway Hop!  You can click on the link in the sentence before if you want to join into the challenge. It's really simple, and there is even a prize associated with that for people who participate.  This hop started because of the challenge that I started 4 years ago.  The goal is to catch up on those sequels that often get set on the TBR pile due to all the new books for review that bloggers get to read.  My goal was to try to get as many of those read in September as possible.  So along with that theme, this is a giveaway where you can win a sequel in any series you want from The Book Depository, and it is international as long as they deliver to your country.  Because this is a sequels hop, you cannot pick the first book in a series, but any one from the 2nd on to whatever number that series is on now!  It does need to stay below $20 though.

Once you've entered my Rafflecopter below, be sure to hop on along to the other blogs in the link-up below to see what other awesome prizes are available.

Email ThisBlogThis!Share to TwitterShare to FacebookShare to Pinterest
Labels: giveaway, September is for sequels giveaway hop, sequels, The Book Depository