Review: The Creeping by Alexandra Sirowy 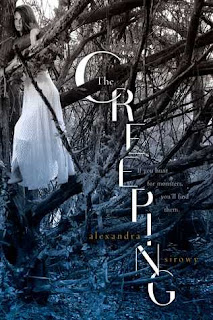 First, thanks to Edelweiss and Simon and Schuster Books for Young Readers for allowing me to read an egalley of this book.  Overall it was a good story.  Although I didn't really find it as creepy as I know some other reviews have said it was.

The main character is a girl named Stella.  When she was 5 years old, she and her friend Jeanie disappeared while playing in the woods, picking strawberries.  But only Stella was found.  The whole town went into shock after it.  Jeanie's older brother has always blamed Stella, saying it should have been Stella and not his sister.  He was so bad about it she even had to have a restraining order put out against him.  Now Stella is 17, it is time for her senior year, and things are supposed to be going the way her best friend Zoey wants it to be, they will be the popular girls and date the hottest guys.  But on the anniversary of the day Stella and Jeanie disappeared, another young girl's body is found.  It is a red-headed girl like Jeanie was.  And along with the death, other things start to happen.  Jeanie's mom is killed.  And then Jeanie's older brother comes back to town.  Now Stella can't remember anything from that day.  But she is trying hard to remember, if only to help figure out who killed Jeanie, or took her, or at least what happened.  But along the way she will have to figure out if it was just a sicko, who maybe has been taking other girls.  Or maybe it was people over time killing for some kind of superstitions.  Or maybe, just maybe, there really is a monster in the woods that takes girls in retribution for what it feels it is owed by the people who caused it to lose its land.  The story gives lots of clues, lots of evidence, and all the different scenarios are examined.  In the end, Stella's life will be in danger again, along with those she loves.  She will find a connection to a boy that she used to be best friends with, until Zoey's quest for popularity began.  And that old friendship will be rekindled, and maybe even become more.

I really did like the relationship with Stella and Sam.  I felt it was very realistic, and I was rooting for the two of them.  I liked that all the time things were left so that you couldn't for sure figure out what was happening. And at the end it was definitely explained in a good way.  And while I might have had an inkling of what the truth was, there was so much misdirection and other clues left that I was kept guessing until the end. To me that is a good story.  I did have a bit of a problem at the beginning, it took a bit to get into it, and I wasn't sure how much I liked Stella and her friends.  It is really easy to not like Zoey.  But towards the end, I began to change that feeling and like her more.

A good mystery, and I recommend it to anyone who enjoys this type of story.  Just give it a little bit to get really going, and you won't be disappointed.
Posted by Lisa Mandina at 7:00 AM