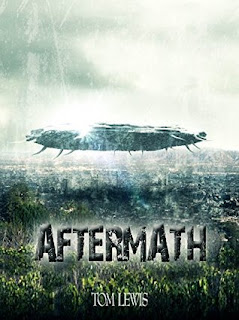 First thanks to Xpresso Book Tours for allowing me to read an e-copy of this title.  I was pleasantly surprised with this book, it really had a pretty good story, and even had some very unique parts to it.  Parts that definitely kept my interest.  I did  have a few issue with the story though, and I'll mention those at the end.

The main character is Paige.  She's the kind of girl who doesn't want to fit in, even though her brother is Mr. Perfect.  In fact when we first meet her, she's drinking alcohol at a school sporting event, and getting into a fight with another girl.  She's sent home after being suspended.  Fortunately for her, her parents are out of town.  But she was grounded, and when she tries to sneak into her room, her brother catches her.  No big deal, he knows how she is.  She goes in to try to help him and his friends get the tv working.  There's a big flash of light, and when Paige wakes up, everyone seems to be going crazy and trying to attack each other.  Now she noticed when she first woke up there was something behind her ear, and kind of ripped it out.  So when everyone else starts going crazy, she's able to stop herself.  Unfortunately, her brother and her friend both get killed. She's able to get the thing out from behind one of his friend's ears, and the two of them are able to escape.  As they head in towards LA, it is all gone.  And Paige figures out it is certain sounds from the spaceships they see hovering in the skies that cause everyone to either start killing people, or pass out.  And another sound causes them to start heading down to the middle of town.

Soon the town is rebuilt, and there are humans that seem to be working for the aliens, patrolling and keeping the other humans working.  At one point her friend is shot, and when she goes to find antibiotics for him, she comes back and he is gone.  But she's made new friends.  Kids who lived in the tunnels underground, who because of being so far below the ground, didn't get the little bugs behind their ears that cause the mind control.  Together they will infiltrate the work camps to try to find Paige's friend.  The will even have to go into what you may call the belly of the beast to find him.

Definitely a good science fiction story.  Reminded me some of the show Falling Skies on TNT.  Just a few issues I had with it.  Paige wasn't very likeable to me at first.  I think that was probably part of showing how tough she was, making it easier for her to survive this "aftermath".  Once I got to where I kind of liked her though, I felt the romance/flirting between her and the boy from the tunnels, while kind of cute, also seemed out of place at times.  Not that I have a problem, it just didn't seem to fit exactly.  But overall, a good story, and a fun read.
Posted by Lisa Mandina at 3:30 PM