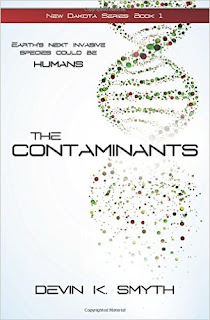 First, thanks to Mother Daughter Book Reviews for allowing me to read a copy of this for free.  This was a very quick, easy read.  Definitely a little bit of a new twist on this type of a story.  It had some parts that reminded me of the show The 100, but had things that definitely made it different as well.

There are two main characters, Jessil and Soraj.  They are living on the one ship that was able to escape the Earth's surface after a huge nuclear war.  While there were supposed to be many ships, only one was able to get away after the war started, and not all the people who should have been on that ship even made it.  Soraj, or Raj, was brought on the ship by his father, Dr. Guyat.  Dr. Guyat had figured out a way to "purify" the Earth, while taking only the people that they feel will be a good future for the new Earth.  Jessil and her dad and two brothers are not people chosen to go.  But her dad sneaks them on to the ship right before it takes off, although he doesn't make it on, pulled off by soldiers.

We get flashbacks of the time up until the present through Raj and Jessil's memories.  But we also find out what it is like on the ship now.  Things haven't quite worked like they were supposed to on the ship, and the Captain thinks it is time to look at going back. But Raj's father says the planet hasn't been cleansed to the point that it would be safe to go back and live.  The cleansing was supposed to be the nuclear bombs destroying everything. Then there would be machines and other chemicals on the Earth to take the bad things out of the air, create a new atmosphere, and also to recreate the life that had been there before.

Jessil and Raj notice a green area on the planet through one of the cameras, meaning that life is coming back.  Then one day there is a message from what is obviously humans on Earth, that have somehow survived.  And Jessil thinks that she recognizes one of the humans as her father.  So she insists on Raj sneaking her on to the recon ship that will go back and see what it is like.  ONly she doesn't know that Raj's father's plan is to kill those humans still there, so that they don't "contaminate" this new Earth they've planned.

The trip back doesn't go quite as planned, beginning with a crash, and then the creatures they find alive on the planet, well it is obvious there has been some evolution going on, just maybe not as the doctor had predicted.

Again, an interesting story, a fun take on humans having to escape the planet, but also having to be able to remake the planet to be livable.  I enjoyed the read, as I mentioned, a quick one, and will definitely recommend it based on those qualities.  While it ended at a good enough point, I see that this is supposed to be the first in the series, so I could see reading more about what is still alive on the Earth, all the different new types of creatures, would be interesting.

About the Author: Devin K. Smyth

Devin K. Smyth is the pen name of Kevin Speth, a part-time novelist and full-time marketing copywriter in the field of children’s entertainment. He resides in southern Wisconsin with his girlfriend and their herd of cats.

The Contaminants is Devin K. Smyth’s first novel and is the first in the “New Dakota” series.