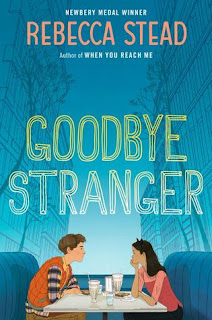 This was a surprise gift in the mail from the publisher, Wendy Lamb books, and Random House, Inc., and I am very happy that I got it.  I wasn't sure at first, but once I started reading, I really fell in love with the story and the characters.  It is a middle grade story, but definitely not too childish for a teen to read.

The story is told from the viewpoint of three characters.  One is really the main person, Bridget, who goes by Bridge.  She was in an accident when she was younger that caused her to have to be out of school for a long time, and she still has trouble crossing the street sometimes because of what happened.  She is a little on the weird side, but still has two really good friends.  On the weird side, one day she picked up a cat ear headband and wore it to school.  She's worn it every day since then.  She's told her friends that she's only going to wear it until Halloween though.  She and her friends, Tab and Em are in 7th grade.  That's an age that is near and dear to my heart, as I used to teach them, and it was my favorite grade to teach.  But the things they deal with, well, it's that age, and the book is very realistic about them, as well as very current.  Em has a boy that she is texting pictures back and forth with.  It starts as simple as a knee or a finger, then a belly button, and soon she isn't sure what she should text a picture of next.  Tab doesn't seem to have the patience to deal with some of the issues, or at least she seems to know what people are really wanting, and this includes this guy that Em is texting with.  The three girls have one rule as friends, no fighting.  That doesn't mean they don't get mad with each other, it just means they don't fight about it.

Another character that we get short chapters from is Sherman, or  Sherm.  He and Bridge are getting to be friends, who knows if it'll be anything more.  Sherm's life is kind of up in the air since his grandfather left his grandmother.  His grandfather that he always looked up to.  We now get his letters to his grandfather, not ones that he sends, but ones that he writes to tell him how he feels.

The third character is unnamed to us until the end.  She is a high school girl, and it is Valentine's Day, and something bad is going to happen. She has friends that seem to no longer be the good friends they always were.  And a new friend that she is afraid she's betrayed by trying to keep her old friends around.  Her part of the story is told as she's skipped school for the day, needing to be away from what she is afraid will happen.  We get flashbacks during her chapters about all the events that take place up until the time her part of the story is taking place.

For a while I was really just wondering who was the unnamed girl.  Was she someone we were reading about?  Or someone that would come into the story at a later time?  When I finally figured it out, and the story proved me right, I totally saw how perfectly the whole story wove the characters all together.  It was a wonderful story, so true and real that I really enjoyed it.  I highly recommend it!
Posted by Lisa Mandina at 1:56 PM