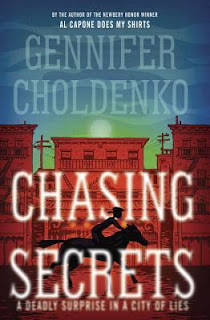 First, thanks to Wendy Lamb Books and Edelweiss for allowing me to read an egalley of this book. Although I got a bit behind on my e-galleys, and ended up having it expire 50 pages before I was done. And that was a really exciting bit of the book!  So I had to check it out once it was available to finish, so that I could go ahead and see just how it all wrapped up and write a review.  Now I have read one other book by this author, Al Capone Does My Shirts, and I really enjoyed it as well.  I think I enjoyed this one even more because of the science aspect with the Plague in it.

The main character in this story is a 13 year old girl named Lizzie.  She lives with her father, who is a doctor, and her brother.  Her mother had passed away when she was younger, and her father is a doctor who will take trades or goods, rather than money for his services some times, so she also lives right next door to her aunt and uncle, her uncle who is the head of a large newspaper.  That way her aunt can oversee her education.  She goes to an all girls finishing school, which she hates.  She enjoys the times when she can go with her father on his house calls and she can learn about being a doctor.  She lives in San Francisco in 1900.  Girls don't do things like she wants to do.  And so her aunt is often unhappy with her.

There comes to be a rumor of the plague in Chinatown, and it gets quarantined, which means their trusty servant Jing can't get back.  But his son shows up having come to stay in Jing's room to be safe.  With his dad gone, Lizzie is the only one who knows he is there, but she must get food to him so that no one else will find out and kick him out.  Along with all of this, she wants to help get Jing back.  She also makes a friend at school, who has a brother that ends up being a friend, and maybe more.  She decides maybe dancing isn't quite so bad when Jing's son Noah teaches her how to dance.  She does all kinds of things that aren't safe for a girl in that day to do, as well as proper.  And the plague does seem to actually be there as they find more and more dead rats, and even have the sickness come into their own home and family.

I love the history, the characters, all of it.  I love how at the end of the story the author gives so many facts and tells you just what was real, what wasn't, and what might have been.  Another great book by this author, and I am now going to be pushing her books to all librarians and teachers.
Posted by Lisa Mandina at 7:00 AM