Review: While You Were Gone (Duplexity #2) by Amy K. Nichols 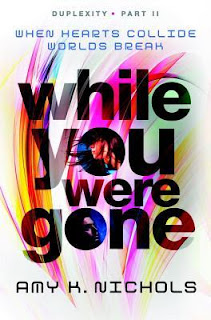 First, thanks to Knopf Books for Young Readers and Edelweiss for allowing me to read an egalley of this sequel to Now That You're Here.  The first book had an interesting take on the whole alternate universe idea, and I was interested to see how they continued with it in this book.  Although actually, it wasn't a sequel really, because it was what was going on at the same time as the first book, only in the other universe.

It is basically the same main characters, Danny and Eevee.  Only this time we're in the world that the Danny we got to know in the first book was from, and we get to know the Danny from the world more like the one we live in.  This Danny has been dropped in a world where his parents are still alive.  And that right there is just like waking up in a perfect dream.  Things are definitely different in this world. Eevee is the governor's daughter, and she goes to a fancy school.  She ran into Danny at an art exhibit.  In this alternate world, the art that we are used to hearing about as the classic, famous works of art are forbidden.  And when Eevee found a book of them, she was caught by her nemesis, the daughter of her father's governorship competitor.  And now she's blackmailing her, and forcing her to help her get into the art school that Eevee had wanted to.  And what's worse is that all of Eevee's art for the school's application gets ruined in a fire, and now she has to start over as well.

While Danny has his mom and dad back, and what seems like a happy family, there is something going on with his dad that he doesn't seem to know about.  He tries to keep his being from another dimension secret, and he does okay, until his best friend Germ figures it out.  Then he has to decide who he can tell, and who he shouldn't tell.  All of this leads into his figuring out that the new security system Eevee's dad is trying to get going is probably what is causing the two Dannys to switch worlds. Every time it is turned on, Danny can feel the other Danny trying to get back home. Of course this book basically ends where the other one did, only going a little farther as Danny and Eevee have to come to terms with the person they love being in the opposite world from where they are.

I definitely enjoyed being back in this story.  I feel like while it had an ending, there is more that we need to know, more that I want to know.  I hope for another in the series, but don't know that there will be.  A good read. You get a little more science in this one, which was something I'd wanted in the last book.  So I was glad to read that.  Definitely a good read that I will recommend.
Posted by Lisa Mandina at 8:00 AM