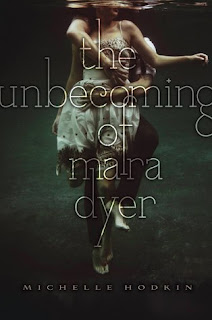 Yes, I'm late to this fandom, but now that I've read this book, I can totally see why everyone loves it.  I got this book a while back from a giveaway, but now I'll have to buy or check out the rest so I can see what happens next.

The main character is Mara Dyer of course.  She recently lost her best friend and her boyfriend in a terrible accident that she almost didn't make out of either.  She feels guilty for surviving, and has hallucinations of her dead friends.  It gets so bad that her mother starts talking about putting her in a mental institution. She is able to convince her family to move instead, saying that the house will only make her remember her best friend and make it harder to move on.  In the new town Mara and her two brothers, one older named Daniel, and a younger one named Joseph, got to a private school.  And on her first day at the school she meets a mysterious and frustrating boy named Noah.  She also meets the "queen" of the school and her best friend, and has a not so great run in with them.  And she meets a boy named Jamie, who will become a good friend.  But she doesn't seem to be done with the hallucinations, including one on the first day where she walks into a class and all of a sudden sees what she remembers of the building she'd been in with her friends as it is falling down around her.  Soon her problems seem to be more than just hallucinations.  She sees a dog that looks abused and neglected near the school one day, and when she's trying to be nice to the dog, its owner comes out and yells at her, and then she sees him do something terrible to the dog.  As she walks back to school she has thoughts about how the dog's owner should die horribly for what he's doing to the dog.  She goes by later and finds out that the man is dead.  And pretty similar to how she'd pictured it.

Other things happen, alligators disappear/die when she has thoughts about them, other people die as well.  She also starts remembering bits and pieces of the night she lost her best friend Rachel and boyfriend Jude.  Turns out that maybe Jude wasn't quite the boyfriend you'd think.  And maybe she might have thought or wished something would happen to him right before the building crashed down on them.  And then there's Noah.  His interest in her is part of what sparked the conflict between Mara and the popular girl Anna.  And while he seems to be very interested in her, he's got quite the reputation for loving and leaving all the girls.  But he seems to be really interested, even as he makes her annoyed.  There's something about him that she can't quite put her finger on though.  She learns more about him because he lets her in, something he hasn't done with anyone else it seems.  But every once in a while he'll leave her for a minute or two, with no explanation.  Or he doesn't show up to school with no explanation.  All of this is going on, and Mara is trying to figure out if she's crazy, or if she's still just trying to heal from the big tragedy.

I loved the relationship between Mara and Noah.  I always feel like any real relationship I might have would be full of sarcasm and annoying things.  The story was great, while I kind of had an inkling of what might be happening in different parts of the story, I was always pleasantly surprised to find I hadn't quite guessed it, and what happened was a really neat way to meet that detail of the story.  While for the most part the story kind of wrapped up at the end, there was a bit of a big cliffhanger or WHAT?! moment at the end.  Definitely leading in to make me so eager to read the next book and see just what is going on.  Great, great story.
Posted by Lisa Mandina at 8:00 AM