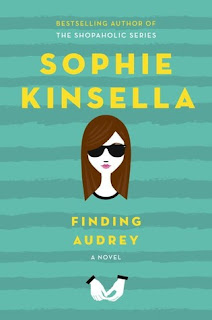 First thanks to Delacorte Press and Edelweiss for allowing me to read an egalley of this title. But then when an actual ARC showed up at the bookstore where I work, I grabbed it. And I'm glad I did, because I loved this book.  Sophie Kinsella's first foray into YA is a huge success in my opinion.  Only issues I had were the same ones I have with her adult books, and they're not bad things, just some products or foods that are British, and as an American I had to Google them to make sure they were what I thought they were.  But Kinsella has definitely brought her wonderful sense of humor with the characters and the way they interact.  Witty dialogue, hilarious parents and the way their teen son deals with them, so realistic, yet hilarious.  I was laughing out loud so many times as reading this, in restaurants and the break room at work as well.

The main character is Audrey, as the title suggests.  Something happened to Audrey at school this past year. Something that caused her to develop such a severe case of social anxiety that she can't even look people in the eyes.  We know it has something to do with some kind of bullying.  But that is one thing that Audrey has learned from her psychologist, you can keep some things private.  So, Audrey hasn't really left the house, other than maybe their own yard.  She hasn't gone back to school, and she wears sunglasses all the time.  When people come to the house, even the mailman, she has to run to her own room or the den where she can shut the door and not see them.

All this kind of starts changing when two things happen.  First, Audrey's psychologist wants her to start trying to break out of things like wearing the sunglasses.  Talking to people outside her family, make a film of her day to day life, go to Starbucks, etc.  Second, Linus, a friend of her brother's, shows up at the house one day, and he tries to talk to her.  Soon she is using him as her guinea pig for what her psychologist is asking her to do.  And soon, a little romance develops.  But along with Audrey's working on her demons, we get to see how her brother Frank has his own issues.  Their mother has decided from an article she's read that he is addicted to online computer games, and she decides to ban him from them.  The way that he argues and deceives his mother with the games is hilarious.  Audrey soon learns how what she's been dealing with has also affected her mother and her family.  The childish antics of her four-year-old brother Felix are so funny in just how true to life they are.  Audrey's father obsession with the band he used to be in, and expecting his kids to love the music, again, so realistic.

I don't know if I can explain just how much I loved this book.  But I know that I'm once again remembering how much I love Sophie Kinsella's writing, and that I have got to hurry up and get Shopaholic to the Stars to read!