Audio Review: Off the Page (Between the Lines #2) by Jodi Picoult and Samantha van Leer 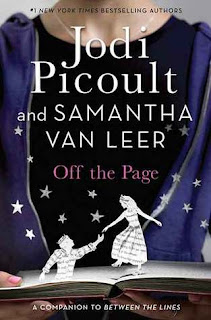 If you remember I decided to try audio books when I drove to Branson back on Memorial Day weekend for a family vacation.  And the first book I tried was Between the Lines, which I loved, and decided maybe listening to audio books in my car might be something I really liked.  After listening to this sequel, I may now be addicted to audio books both in the car, as well as when I am walking at the park.

I have to say, I find myself really missing this world now that I'm done listening to it.  I find myself wanting to go back in and be with the characters and see what they are doing now.  As with the last book I love the characters and the dialogue and the whole story itself.  There were times I wanted to cry, and of course times I was laughing out loud, just as with the last book.  Again there is more than one narrator, three of the characters, well kind of four, have their own person narrating.  If you haven't read the first book, there might be some spoilers, although supposedly you don't have to read the first book to read this one, at least that is what I've heard people say.  And there is a pretty good recap at some point, from each of the characters in their own way.

Prince Oliver was able to come out of the book to be with Delilah, when Edgar, the son of Jessamyn Jacobs, the author of the fairy tale, decided to go in and make the book his own.  So Delilah and Oliver had to first convince Jessamyn to move to where Delilah lives. Then it was time for him to start school.  Delilah and her friend Jules had to do a lot of prepping for Oliver to try to prepare him for high school.  But Oliver, for the most part, kind of walks in and almost is instantly popular, a la the movie Encino Man.  At least that is kind of what I was reminded of as I listened to the story.  Things seem to be just about perfect.  Until Oliver's friendliness and popularity cause issues between him and Delilah, and Edgar's mom has an episode where she ends up in the hospital overnight.

At first Edgar is excited to be in the story.  Until the other characters don't seem to like his space version of the story, and he has problems keeping them on task.  And soon other things start happening.  Like the book sending a message on its own asking Oliver to come back.  Then things start getting crazy.  Frump, who had been changed to a boy in Edgar's version of the story, starts changing back to a dog. When he tries to make a wish to have what he wants most, he ends up outside of the book with Oliver and Delilah, but still as a dog.  Delilah's dog Humphrey gets sent into the book in his place, where he can now talk.  But he's a dog still, not a boy in a dog's body like Frump was.  And then, well, Seraphima also wishes herself out of the book, to be with Frump.   When she does that, then Jules is sent into the book.  Now Jules and Edgar get to know each other.  And may have their own little romance going.

Before the book is over, we will lose one beloved character.  Another will develop a deadly illness, new romances will break up, and there will be other tragedies. But this is a fairy tale, so there will be a happy ending, romantic and family both.  Although not all ends may be tied up as neatly as I'd like, I smiled throughout the whole ending, and as I said before, missed the characters when it was over.

I love, love, love this book and the one before.  If you haven't read these yet, you totally should.
Posted by Lisa Mandina at 9:00 AM