Review: Get Dirty (Don't Get Mad #2) by Gretchen McNeil 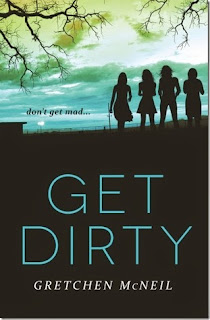 First, thanks to Balzer and Bray and Edelweiss for allowing me to read an egalley of this title.  I love reading this author, and really liked the first book, Get Even.  So as soon as I saw this available I immediately requested it.  I don't know that I loved this one as much as I loved the first one, but it was definitely still very suspenseful and kept me on the edge of my seat.

Our same characters are back from the first book.  Bree, who took the fall for everyone and ended up in Juvie.  Kitty, who is feeling bad for one of the first things DGM (Don't Get Mad) did, and wants to try to help fix something for that girl.  Olivia, the popular girl, who is trying to keep all of it a secret when around her mean girl friends.  And then there is Margot, who is in the hospital in a coma.  They've of course stopped doing all the pranks.  Not after the deaths and kind of being caught.  But there seems to be a new group or a copycat DGM now.  Starting with pranks on some of the more popular people, leading to new deaths.  They've had to swear in some of the guys who have been there to help, Ed the Head, Logan, and John.  Kitty's boyfriend Donte and best friend Mika seem to have a secret from her, and that is making her worried.  Olivia's mom seems to be getting worse, with some different medications that have shown up, and quitting her job to take an acting job that is just out of nowhere offered.  Bree is on house arrest, with her mother and a big Thor-like bodyguard named Olaf, and this also means no cell phone or internet to even try to figure out with her friends what is going on.  She even runs into another former DGM victim, and sees that while what they did in school was horrible, but they were coming from a horrible home life.  And still, there are manila envelopes showing up, leading them all to what may be a big finale.  We're given some hints into one of the new members that may either be clues to the new DGM, or maybe just clues to the real killer.

It was a bit of a switcheroo towards the end, the author set that up well.  A great story that also tells how sometimes bullies have reasons, not good ones, but reasons in their home life that may be what has led them to what they've done.  A great suspenseful read, another great mystery from McNeil, with great characters, ones that you can see both sides, and even root for those bullies when it might be the right thing to do.
Posted by Lisa Mandina at 3:38 PM