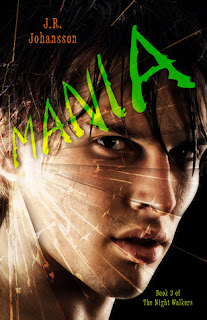 First, I have to thank the author, as well as Netgalley and Flux publishing.  I first came to love this series back in January of 2014 when I read Insomnia, the first one, after winning it in a giveaway.  I got the 2nd book, Paranoia, as an egalley from Netgalley last summer, when I was not fortunate enough to get to meet the author on the last day of BEA.  A couple weeks ago I got an email from the author asking if I was still interested in reading and reviewing this third and final book in the series.  Of course I hopped on the chance!!  She emailed me a copy, and right about the same time I remembered that I'd also seen it on Netgalley and requested it there as well.  And I have to say I loved this book as much as I loved the first two, which if you click on their titles, you can go to my reviews.  Obviously if you haven't read those two, most of what I say her won't make sense, and will be spoilery. But if you have read the first two, then I shouldn't be giving anything away with my summary.

This book not only is back in Parker's life, but we get to also see from his brother Jack's viewpoint.  When the last book ended, the Takers' headquarters had been destroyed by Parker's and Jack's father.  Unfortunately their father also died.  The good news is that supposedly their father had figured out a new type of vaccine that would help the Takers to be able to dream and sleep.  So that they wouldn't have to take over people's lives like they did.   Unfortunately the leader of the Takers, Cooper now that his father is dead, still wants the elixir they had been given that would help them to be able to take over people for good and as they put it, be gods.  Chloe, Cooper's sister, also a Taker, has now started to go along with Jack and Parker and Finn. When she let Finn go, her family basically disowned her.  And now all she wants is to help make the serum that will give her a normal life.  But their dad didn't just leave instructions.  He left clues to get to bits and pieces of it until they had it all added together.  And along the way they get one more thing to deal with, Parker gets kidnapped and taken by Cooper and his group.  Once there the scientists start injecting him with all kinds of things that make his life miserable, to the point where he can only hope to die.  Jack is given 10 days to make the original serum, which his dad didn't leave any instructions for.  So of course the time is spent doing their best to find all that is needed for the new "cure" in time to save Parker.

Another great story.  I like both viewpoints, really helped to see just what was going on, as well as getting a look inside some of the characters you might not otherwise have had time to learn about.  And it was so great getting back to Finn.  I love Finn.  His funny t-shirts, all of it.  So it was really fun to have him back.  There is lots of danger in this.  Times we don't know for sure if someone has betrayed the group.  Or if someone else might be able to help even though they are on the wrong side.  I liked all the different/new ways they were able to do things in dreams, and even finding more about what started all of the different things they're dealing with.  The ending was pretty set, although I can see that maybe, some day, there could be another book, and I would not be opposed to that!  A great finish to a favorite series of mine.
Posted by Lisa Mandina at 8:24 PM