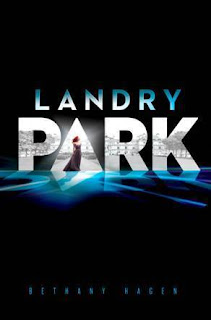 I'd been interested in this book for awhile, the cover of course caught my eye first, then I read the synopsis and was really intrigued.  I got this book in February through the Books & Bloggers swap hosted by Chaotic Goddess Swaps.  My swap partner was Emily from Follow the Yellow Book Road, and this was one of the books I got from her.

What it didn't tell me in the synopsis, but was one of my favorite parts of this book was that it all took place in Kansas City, where I live!  I could picture so many things in the story just from the author naming the locale or a landmark that I was familiar with from living here my whole life.  It was also cool to find out that the author was from KC.

It is a dystopian society where classes have once again become the way people live.  The East, China, Japan, etc., fought a war against the US, and now a lot of our country is gone.  Not only because of that though, but because of global warming and the depletion of the fossil fuels that led to the creation of a nuclear fission type of material that was expensive and harder to come by, mainly for the wealthy.  The main character, Madeline Landry is the descendant of the creator of the charges that are used for electricity now.  So of course her family is one of the highest regarded in the gentry.  As the oldest/only child, she must marry and take over managing the estate one day.  But Madeline wants to go to the University, something that first children don't get to do.  She doesn't care about getting married, would prefer to wait until after she has at least attained the education she so wants.  But her father will not let her, he only sees the responsibility she has to the family.  And when a very eligible boy comes to town, her mother hopes for her to make a match with him.  His name is David Dana, and when Madeline first meets him, she is intrigued by him.  He doesn't seem to be the same as her other peers who are pretty much proud to be gentry, and feel as if all is deserved to be given to them.

But a tragedy occurs when a childhood friend/enemy of Madeline's, a girl named Cara, is attacked outside a debut party.  The gentry assume it is a Rootless, the people who change the charges for them, and end up dying younger because of all the radiation poison they get in their lifetimes.  Soon the gentry are persecuting the Rootless because of the attack.  And Madeline's father seems to be leading the hunt.  But Madeline knows Cara is hiding something, because she has grown up and knows the signs when Cara is lying or covering herself.  Soon David and Cara debut together, and while there seems to be a connection between David and Madeline, she can't quite figure out why he is still being Cara's boyfriend in public.

A great story, I kind of wondered about some kind of little twist at the end that had to do with some stories about Madeline's childhood earlier in the book.  It didn't really seem to fit in until the end, when I thought, yeah, I knew it had to do something with what was going on.  And I'm guessing the sequel will go into that much further.