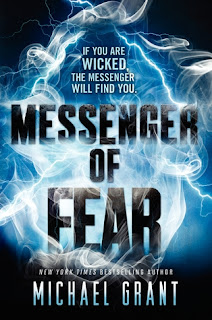 I was lucky enough to get an ARC of this at BEA in the summer of 2014.  I also got to meet the author last summer, who I have been a huge fan of ever since I first read his book Gone. Unfortunately, I'm not quite sure I was a big fan of this book.

The main character is Mara, although she doesn't quite remember who she is when the book first starts.  She wakes up in a field that she doesn't recognize and has no idea how she got there or where she is.  As she begins to try to make her way out of the foggy field, she comes across a coffin with a girl inside. But as she looks at the girl, she knows it is not her.  She turns around and sees a cute boy, who will only tell her that he is the Messenger of Fear.  And he shows her how the girl in the coffin died.  She shot herself.  So then they follow back in time to the bullying that led to her death.  But it's not only this that he shows Mara.  She also sees a boy and girl that run over a dog.  I almost quit at that point.  But since the book was portraying what they'd done as bad, I went ahead and read on.  There was another bullying type of situation that Mara saw.  She also saw the people get punished, or tested in a game.  Soon, Mara will find out why she is there with the Messenger, she will learn what he does. She will meet other people that he deals with.  Some not quite so nice.  Some that she can't quite figure out.

The people are all bad, and for the most part they get what they deserve. And I wondered if the little twist at the end would be what was going to happen early on, but it was done in a very good way.  I don't know if I'll read on or not.  Will see if I feel like it and can fit the next one in.  I think I saw an egalley of it on Edelweiss.

I wanted so bad to like it since I've loved Grant's other books, and since I met him when I got this one.  I remember when I saw him at BEA last summer.  I'd come back and got in line pretty early, before anyone else, and it was during the time when they were having a lunch break for the workers, so there weren't any authors there at the time.  When he came up I was first in line, and he called  us up and said he'd sign whatever we had. Well, I felt greedy, but I asked him if there were any books because we'd thought we were supposed to get Messenger of Fear.  So he went in the back and helped them bring his books up front to be signed.  He was really cool! 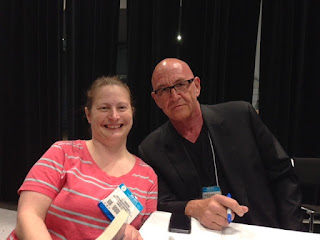