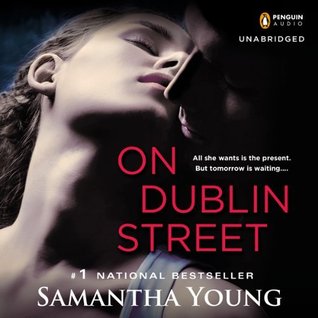 This is another audiobook that I borrowed from my public library.  I chose it because the author, Samantha Young, is supposed to be at the NOLA Story Con in September.  And because up until recently, I'd only read about 3 or 4 of the authors that are going to be there.  So I made a goal to try to read at least one book by all of the other authors listed.  Now there are still a few that I couldn't find any books I would want to read, just not my type, but the others I'm going to try to read or listen to an audiobook if at all possible.  And let me tell you, Samantha Young did NOT disappoint me!  I'm now very excited to not only read/listen on in this series, but also to meet her in September.

The main character is Jocelyn, or Joss as she prefers to be called  She is a former American, who moved to Scotland for college, partly because it is where her mother's family is from.  She lost her mother and father at a very young age, and that is a little flashback we get at the beginning of the book.  Because of the loss of her family, she has always kept pretty much to herself.  She chooses not to get too close, not even to her friends.  But school is over, and her current roommate, and closest "friend" for all the friend she can stand to get close to, has moved away and so now she must find a new place to live.  She is going to check out an ad for a place on Dublin Street.  It is more expensive than she really wants to pay, but when she gets there, she falls in love with it, and knows it is probably perfect for what she's looking for.

On the way to the apartment she ends up having to share a cab with a guy, a very attractive businessman.  Now, he knows he is attractive, and doesn't mind letting her know that he knows.  Even as he gives her a very thorough once-or twice-over, checking her out as much as she does him, he makes sure to tell her that he has a girlfriend.  When she finally escapes the cab, he asks who she is, but she doesn't tell him.  Later on, shortly after she's moved in with her new roommate, Ellie Carmichael, she runs into him again.  Only this time she's at an even bigger disadvantage, as he is sitting in her living room when she comes out of the bathroom, naked, because she has forgotten to bring a towel with her to bathroom.  After she finally gets him to turn around and goes and gets dressed, she comes back to ask him why he is in her apartment. Turns out he is her roommate's brother, Braden Carmichael, and he owns the apartment.

The sexual attraction between Braden and Jocelyn is so intense you can feel it through the words of the story.  It's so much that Braden ends up deciding that he wants to have Jocelyn as his girl.  And what Braden Carmichael wants, Braden Carmichael gets.  At least that is what his sister Ellie tells Jocelyn.  As I've mentioned before, Jocelyn doesn't want any connections.  She is afraid of what losing anymore people will do to her.  The things that happened to her in the past, and how she lived her life.  So she fights it at first.  And even when she sort of gives in, she tries to make Braden understand it is a physical relationship only, she doesn't want anymore.  But when they get some bad news, Jocelyn will have to decide if continuing to keep to herself is worth it, or if she should give into the feelings for these two that she has developed, both friendship, and love.

I loved this story.  It made me cry even as I was so mad at Jocelyn.  I understood, well kind of understood, her reasons for why she did things based on her background. But it still made me angry.  And something I loved was when I found some short stories, or basically certain parts of the story written from Braden's point of view, on the author's website.  I loved seeing just why he did certain things. Things that either made me love him even more.  Or things that made me not hate him for certain things in the original story that I wanted to hate him for.

It was also fun listening to the narrator do the Scottish accent.  While I prefer an Irish accent, it was definitely fun to listen to this too.  I'm very excited to read on in the series, although the next one is about a girl that Jocelyn worked with, who basically is described as a gold digger, so I'm not sure how much I want to read about her. But if Anna Todd could redeem Molly a little bit for me, then I guess that Samantha Young can redeem Johanna, who I don't hate like I hated Molly.  I just have to pace myself as I try to listen to one book by each of the new authors before I get too involved in listening to all the rest of the books by each author.

I highly recommend this as a very steamy, emotional, and even funny read.
Posted by Lisa Mandina at 7:00 AM