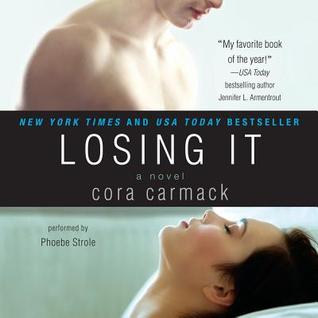 This was my next audiobook that I downloaded for free from the public library.  And while the way the guy looks on the cover is a little creepy/pasty pale for me (yes I know it's part of the story that he's so pale because he's British), the guy in the story was definitely a good one!  Cora Carmack is another author I've heard a lot about, along with Colleen Hoover, in the New Adult genre of books.  And I have to say that this book did not disappoint.  I loved it, and can't wait to read the other books in the series, as well as more books by her.

Now, the title of this is the same as an ARC I told you about a couple weeks ago that I had emailed and begged the publisher for, Losing It.  However this is a different author and story, even though there is the small smidgen of similarity in that both are about a girl who is still at a virgin at an older age.

In this one, the main character is a college senior named Bliss.  Bliss is a virgin, and her best friend has helped her to decide that it is time for her to get that out of the way.  So they decide to go out and find her the perfect guy at a bar at the beginning of the book.  At the bar she first sees the bartender, who is cute, and seems to be flirting back with her.  When she heads back to the bathroom, she notices a cute guy sitting by the pool tables reading Shakespeare.  She's a bit tipsy at this point, using alcohol as a way to smooth away her nervousness at this big step.  She teases the guy that the only reason he would be reading Shakespeare at a bar is to try to pick up women.  When he responds, with an English accent no less, she ends up staying and talking to him, and finding that maybe this guy, his name is Garrick, is who she will pick for her first.  They end up taking his motorcycle back to her apartment, because he had locked himself out of his own, and was waiting for the locksmith to come.  Things are getting very hot and heavy, everyone is pretty much undressed, and suddenly, Bliss freaks out, and leaves him, claiming that her cat is at the vet and she has to go pick it up.  She runs out of her apartment and goes and hides around the corner of the building, watching the door of her apartment to see when he will leave.  About 10 minutes later, he does finally come out.  And she's horrified to see that he just walks over to the building across the way, he lives in her apartment complex!

Then she goes into school the next day, she's an acting major, and things get worse.  Turns out that Garrick is her new professor.  At first they try to fight it, with Bliss trying to avoid him so that she won't be embarrassed.  But soon the two of them figure out that maybe they can't fight it.  Of course, she still doesn't give away about the sex thing with him.  She waits.  And in the end, will it work out with him?  Or will she keep running away from all that scares her about the act.  Will Garrick be able to put up with all the pushing away she does?  And what about her guy friend, that decides to confess he does like her as more than a friend. Will she try seeing how things go with him?

It was a very sweet story, and I liked most of it. Although Bliss did annoy me at some parts.  Things she did that I can't imagine doing, things that messed things up in her relationship with both Garrick as well as her friendship with the other guy.

A sweet read, and I look forward to reading/listening to more books by Carmack in the future.
Posted by Lisa Mandina at 7:00 AM