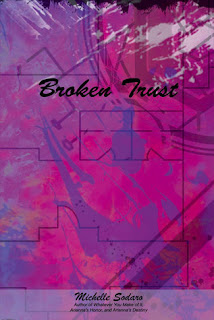 I was excited to read this book after hearing the author talk about it as she was finishing it up and getting it ready to publish.  Michelle is a friend, and I would kind of say she was my writing partner for 2014-most of 2015.  She is the reason I feel I was able to actually complete my very first NaNoWriMo novel in November of 2014.  We tried again this past November, but between her having to move farther away from me, and the fact that my story idea wasn't really going where I thought it was going, and I got stuck, I didn't finish.  Of course I had to buy one as soon as she published it last June, but things kept getting in the way with all the review books I was trying to wade through, and it got put off until last month.  In a way that might be kind of good, because it is the first book in a duology, and the second book should be published soon.

The book has two main characters really, with a very spectacular supporting character who will be a main character in book two.  The first character we meet is Ben.  Ben is an architect that comes from a somewhat well to do family.  In fact, his grandfather has a trust fund worth one mission dollars set aside for each of his grandchildren, the main stipulation being that they must marry a healthy, Catholic person that he approves of.  The reasons behind the stipulations have to do with their grandfather's loss of his daughter, Ben's mother, as well as his wife, their grandmother.  Ben's two older siblings have gone along to the letter of the rules in order to get their money.  Well, other than their marriages are pretty much as fake as can be, for show only, and to get the money.  And they choose to not work and just live with their spouses and kiss up to their grandfather.  Ben plans to get the trust and use it to fund his lifelong dream.  A home for runaways.  He has a woman that he has grown up with, Vicky, who just kind of seems to assume that she will marry him.  And for now, he just kind of goes along with the things she suggests, knowing that the trust money will be all he needs to take care of his dream.

Our other main character is Sam.  Sam is an artist who has had a very hard life.  Her brother died when she was younger, and due to the issues with her alcoholic father, she was taken away and put into foster care.  Foster care wasn't good for her, but her art has helped her move on and keep her life going in a positive manner.  Sam meets Ben when Vicky has him stop by to do a portrait of the two of them for their wedding present.  They both feel a bit of a pull, not that either does anything about it.  I mean it is obvious to Sam that Ben is taken.  One night Sam stops at a music store that is nearby her art studio/apartment to try to get the CD she needs to listen to in order for her current painting project.  The store has closed, but the woman inside sees Sam outside saying that she has an emergency, and lets her in to help her get the CD she needs.  It is a strange request, just the 2nd CD in the Les Miserables soundtrack.  The woman who runs the music store is Ali, and Ali is actually Ben's younger sister.  Ali and Sam soon bond over their "uniqueness" and become best friends.  Ali is our third supporting/main character.

The attraction between Sam and Ben seems to grow, and Ben realizes that he's just been going along with Vicky, but really he doesn't like her in the way she likes him.  In fact, the more things begin to change between Ben and Vicky, it seems she really only likes him for the trust money that he will inherit once he marries her.  As Sam gets to know Ben more, and learns about his home for runaways idea, she falls for him even more.  You see, there was a time when if there had been a home like that available, she would have probably run away from her foster homes to be in a better place.  Ali hires Sam to do a mural in her music store, and Ben knows he wants Sam to do a mural for his runaway center as well.

One thing I really loved about the story is that it was set in Kansas City, and I loved all the references that only someone who had lived here would get right away.  A lot of the details in the romance were great, reminded me a lot of other romances I've been reading lately.  I love all the characters, Ali is so much fun that I can't wait till book two, Redeeming Trust, to read her story with Officer Biceps.  The issues I had with the book mostly have to do with the usual issues I have with self-published books.  There were a lot of mistakes that could probably have been fixed with one more set of eyes doing an editing run-through. Something that I know self-publishing authors don't always have like the big publishing houses do.  I feel that the love almost was a little too "insta-love" for me, when I looked at how many days the story seemed to take place over, or at least those parts of the story.  Also, Vicky kept coming by Sam's studio it seemed, but Sam never bothered to ask either Ali or Ben about it?  I mean, it seems to me, if I was supposed to be dating someone who said they weren't in a relationship with this other person that I'd thought they were at first, but it kept seeming like the other person thought they were in the relationship, I'd at least have asked my friend about it.  So that seems like kind of a loose end that could have been tied up.  I see why the author did it, for what happens at a pivotal moment at the end of the story, it just seems unrealistic to me that Sam never asked or mentioned anything about it to either Ali or Ben.

However, even with the issues I've mentioned, I grew to really like the characters, and the ending was pretty perfectly written.  I had one tiny issue there with something supposedly being said out loud, but it didn't really say that, so the next part about that wasn't seamlessly fitting into the story for me.  As I also mentioned, I'm very excited to read on and see how Ali's story goes, and hope for more with Ben and Sam in the 2nd book as well, because their story isn't over yet!
Posted by Lisa Mandina at 7:00 AM