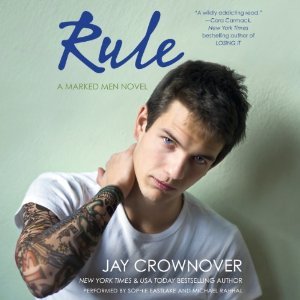 Another audiobook that I downloaded from my public library, again because it is an author that I am going to get to meet at the NOLA Story Con in September.  I have to say that I seem to be falling in love with bad boys more often. And that is not usually me.  I've always been into the preppy, boy next door, good guy.  Now honestly, I have been looking at guys with tattoos more since I got my first tattoo several years ago.  But this book really, really made me want the bad boy, the tattooed, pierced, you name it, bad boy.  And other than the characters rooting for my city's biggest rival football team because they live in Denver, I'm pretty sure I'll be reading all of this author's book.

The name of the book is the name of one of the two main characters.  Rule is the bad boy, tattooed, pierced face, pierced other parts of his body, and also a one night stand with every girl he sees if he can help it.  Shaw is the other main character. Shaw is a good girl, she's pre-med, comes from a wealthy family, and is the girl next door in other words.  Shaw and Rule are friends because of Rule's twin brother, Remy.  Remy died a few years ago in a car accident, and Shaw has been working to try to keep Rule going and seeing his parents every Sunday.  Shaw and Rule aren't really friends though, they argue all the time, and don't see each other any time except on the Sundays when Shaw comes and drags Rule out of his bed, drunk, sometimes not alone in bed, and drives him back to their hometown.

Now Shaw has always actually had a crush on Rule. Even though all of Remy's family always thought she was with Remy, it was never like that for those two. They were just friends, and Remy even knew the whole time how she felt about Rule.  But Remy took Shaw under his wing, and brought her home and made her part of their family, especially since her own family was not one to write home about.  Her parents basically used her for their own status, a daughter going to med school.  Other than that, they don't really spend any time with her.  All they want from her now is for her to keep dating the perfect boy, Gabe, who is the son of a well known judge.  But this guy is not as great as her parents think.  When Shaw breaks up with him because she doesn't like him, he kind of goes stalkerish.  This all kind of comes to a head on the night that Rule ends up running into Shaw at her job.  She works in a sports bar, and the night he sees her there, she is wearing a "sexy referee" costume.  Rule has never seen Shaw in this light before.  He's never thought of her as a girl he might be attracted to.  But now, now he almost can't stop thinking about her.  And when her ex-boyfriend Gabe shows up at the bar and tries to threaten her, Rule and his buddies meet him outside and tell him he'd better leave her alone or he'll have hell to pay.

Things kind of go back to the same way until the night of Shaw's 20th birthday.  Her roommate and best friend takes her out, gets her a fake ID, and they go to a bar, and of course get drunk.  Rule runs into her again, and this time, he ends up taking her back to his apartment, not far from the bar, because of how drunk she is.  In her drunken state, Shaw gets brave.  And she basically throws herself at Rule, and he catches her.  She doesn't regret it in the morning, but she still sneaks out, not wanting Rule to know that she likes him in any other way, knowing how he is with girls.  But Rule can't seem to stop thinking about her.  And he decides that maybe he and Shaw should give it a try.

It won't be an easy road for the two of them.  Rule has never been in a relationship, and has no idea what he's doing, not to mention serious issues with getting close to people, partly because of how his parents have always treated him.  Of course they've never approved of the tattoos and all of that, but his mother blames him for the death of his brother.  Shaw is still having to deal with her stalker ex-boyfriend, and also refuses to let Rule turn her into one of his floozies.

This book had so many good emotions and so many good back stories.  We get introduced to so many awesome characters.  It looks like all of Rule's "boys" are going to get their own books in the rest of this Marked Men series. And I'm so excited to read about all of them.  But I fell in love with Rule.  I want my own tall, dark haired, lean yet muscular, tattooed, pierced boy.  And I love that Rule was a tattoo artist himself.  I'm definitely intrigued with some of the piercings he had as well.  I have no idea why in the world Shaw wants to get the piercing she wants, I cringed every time they talked about it.  But hey, to each their own, right?  It was also a pretty steamy book, which I enjoyed how that worked in perfectly along with the rest of the story.

I loved the book and will have to buy my own copy just to get signed when I go to meet the author in September.
Posted by Lisa Mandina at 7:00 AM