Another audiobook success, leads to another new favorite author for me, Colleen Hoover. And it's really cool that she's on tour over in Italy with my other favorite new author, Anna Todd, because I get to follow them both!  I can only hope that if I ever get the chance to meet one of them, they'll be together so that I can meet them both at whatever signing I go to.  Unfortunately, I've not noticed Hoover to be as interactive with her fans as Todd is.  :-(  While these books say they are a series on Goodreads, nowhere do I see anything about there being a book 2.  I can only hope there is, because I totally loved this one.  There will be one fact that I will have to give away, and it is kind of a tiny spoiler for the first 15% of the book.  But without knowing that, it makes it really hard for me to express just what I love about the book so much.  And I decided to do the reviews for both of these books together in one post. 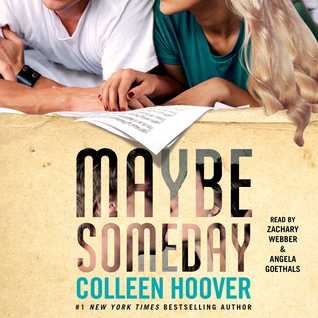 So, there are two main characters. First is Sydney, and when we first meet her in the book, she's sitting outside her apartment in the rain on her birthday, after finding out that her boyfriend and roommate/best friend are sleeping together.  The other main character, Ridge, is kind of her friend, he lives in the apartment building across from where she did live, and she has only ever communicated with him by text.  You see he sits outside on his balcony and plays his guitar loud enough that she could hear it when sitting on her balcony.  She loved listening to him, his original songs, and she would even make up her own lyrics and sing them to herself as she would sit and study while listening to him play.  At the beginning of the book, Ridge invites Sydney to come stay with him and get out of the rain, because he sees that she sends the taxi away, which she has to do because she left her purse in her apartment.  Sydney is still mad at Ridge, and doesn't want to go up, until one of his roommates, a girl named Bridgette, comes and takes her suitcase and leads her up to the apartment.  For some reason Bridgette decides that Sydney must be deaf, and treats her like that, yelling at her when she's talking to her.  You see Sydney is mad at Ridge, because he knew that her boyfriend had been cheating on her.

Once inside Ridge's apartment, Sydney is confused when he doesn't speak to her, but only texts her.  And that, *SPOILER* is because Ridge is deaf.  This leads to all kinds of interesting things.  I mean of course she first wonders how he can play the guitar so well when he can't hear.  And then as they begin to hang out, she has to learn how to communicate with him, as well as she is so curious about what it is like for him.  And with Sydney, he is able to try to hear/feel her singing, and he does it by placing his ear right up against her chest and feeling the vibrations.  Of course this is a very intimate thing to do, and both of them begin to feel an attraction.  *END OF SPOILER*

So of course there is a problem once Sydney gets over her issue with Ridge, he has a girlfriend. So while he is definitely attractive, and she feels attracted to him, after what happened with her boyfriend, she doesn't want to be the other woman, and she doesn't want to make any other woman feel that way.  And Ridge, well his girlfriend is deaf, and he only wants to do whatever he can to take care of her, after all that she's had to deal with in her life.  Of course living together, with the girlfriend not nearby, and only visiting every couple weeks can lead to attraction growing between Sydney and Ridge, even as much as they fight it and refuse to give in.  They even begin a little game to help themselves fight it. Whenever they begin to get those feelings, they ask the other one for a flaw to help them be disgusted or not think of them as highly.  They do this through texts and also on Facebook chats.

Oh yeah, I never told you why Sydney and Ridge started texting each other from their balconies in the first place.  Ridge was having trouble writing lyrics for his band's songs, and when he sees Sydney singing along, he asks her to tell him her lyrics.  And he is amazed by them.  He uses this opportunity to get help with the lyrics, and it also ends up helping her when she needs a place to live after leaving her apartment to get away from her cheating boyfriend and traitor of a roommate/best friend.

I've seen some reviews saying this book is all about cheating, and in a way you could say that. BUT!  These people are the way I believe I would be.  With neither of them wanting to hurt his girlfriend, who he still loved, I think they handled it the best they could up until you know, well they have to be found out.  And the way his girlfriend deals with it, I believe it could be realistic as well in how it all plays out. 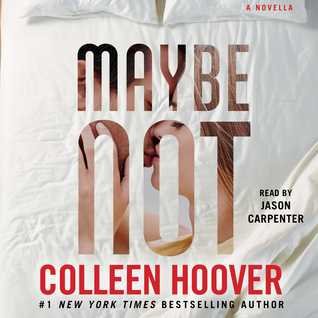 This book is told from Warren's point of view.  Good old loveable Warren!  In the first book we kind of knew that he had a bit of a thing going on with Bridgette.  We also know that the two probably had more feelings for each other than they let on, that it was more than just a friends with benefits, or just hookup type of relationship.

In this second book we get to see how Warren first meets Bridgette, we learn there is a reason why she came to live with them in the first place.  At the beginning, Ridge's brother Brennan still lives there. And it turns out there is a connection between Brennan and Bridgette, not romantic, but one that makes him want to let her stay, and makes him want to help her out.

We get to know more about Bridgette, although this book is all told from Warren's point of view.  And wow, do I love Warren!  Other than one bit in the first book that really upset me with him, he soon redeemed himself again, and it made sense why he did what he did.  This book is also fun to see all the pranks that get done to him by the other people in the house, not to mention we find out just why he is always watching porn.  But it's not just a fun book, there are definitely some heavy emotions in this one, as Warren tries to get Bridgette to come over to the side of giving him a chance of more than just being sex buddies.


All in all, I love all the characters, and I could definitely hope that there would be more in the series.  I can think of at least one other character, like Brennan, Ridge's brother, who I'd love to see a book about.  And others, but I'll leave  those unmentioned so as not to do any more spoilers.
Posted by Lisa Mandina at 11:00 AM