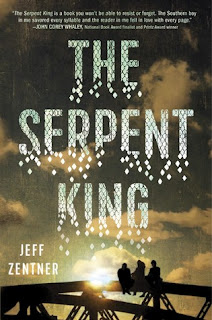 I was lucky enough to find an ARC of this sitting on the table in the breakroom of the bookstore where I work one day when I walked in.  The story idea peaked my interested when I first read the synopsis.  But after a while I began wondering if it was something I'd really want to read.  As most of my readers know, I don't read that many plain contemporary YA books.  But then I kept seeing tons of good reviews, and when I offered it up for trade, really only for a book I had high on my wishlist, lots of people wanted it. So I decided to go ahead and start reading it.  In the end I really enjoyed it, and it is one that I will end up purchasing for my school library.

There are 3 main characters in this book, and we get different chapters from each of their points of view.  I felt like each character had their own unique voice, and that was helpful in being able to tell who was who as I read.  First was Dill, or Dillard Wayne Early, Jr.  Dill is where the title really comes in.  He comes from a family of preachers who used snake bites and poison as part of their preaching.  Now his grandfather didn't like snakes after he lost a daughter to a snake bite, and he kind of went a bit crazy in his mission to kill all the snakes.  Dill's father did use the snakes and drink the poison.  But Dill had always disappointed his father, in that he was never brave enough to take hold of the snakes himself.  Dill has reason to not worry about his father's approval though.  His father is in jail, because there was child porn found on his computer, and he was accused of molesting, or trying to molest a young girl in their congregation.  With him in jail, Dill's life hasn't been great though.  The kids at school all see him as being like his father. Especially when his father's lawyer had even tried to claim at one point that the pictures could have been there because Dill put them there.  Dill's mother was in a car accident one day on the way back from visiting his father in jail, so now she has a hard time working to support them.  And she even goes so far as to almost blame Dill for not taking the fall for his father so that he wouldn't be in jail.

The 2nd main character is Lydia.  Lydia comes from a good family.  Her father is a dentist, and her parents are still together and they moved to the small town because they thought it would be the best environment to raise their daughter in.  Lydia runs a blog that is called Dollywould.  At first I didn't pay close attention to the spelling and I thought she was running the website for the amusement park by the name of Dollywood.  But then I realized it was her personal site, and it was kinda like "what would Dolly Parton do?"  For her small town Lydia is quite far reached with her blog. She has a lot of followers, and lots of fashion brands that send her things just for her to photograph and publicize on her blog.  But she is looking forward to getting out of this town.  The other kids in town have just never really gotten her, so she has always been kind of an outcast as well.

The final main character is Travis.  Travis is a big guy.  He goes to school part of the day and then works the rest at a lumberyard.  Travis's home life isn't great either.  His older brother died in the military. And since then, his father began drinking, a lot.  And when he drank he would get violent.  Not just with Travis, but also with his mom.  He picks on Travis for not being a football player even though  he is really big.  Travis is really into this fantasy book series.  So much that he wears a dragon pendant all the time, and has a big staff that he carries around, when his two friends, Dill and Lydia, let him bring it along.  He's always got one of the books in the series with him, it seems like wherever he goes.  He goes to the online chat and other groups of people that are into the same world.

It is their senior year.  Dill has feelings for Lydia, but he has never told her.  He's worried that she is ashamed or embarrassed of being friends with him and Travis, because she never talks about them on her blog.  And he is not sure about telling her about his feelings.  And he's worried about losing Lydia when she leaves to go to New York for college.  She almost convinces him to go away to college, but his mom and dad tell him no.  His place is home taking care of his mom since they blame his testimony for his dad being in prison.  Travis makes a friend named Amelia on the board for the books.  The more he talks to her, the more he wants to meet her, and she seems to feel the same.  But he is dealing with his father being more and more violent.

The things they have to go through in the story are some pretty big things.  And at the end, all I can say is whoa at one point, when something I didn't necessarily see coming happens.  In the end there is a hopeful streak in the story, and it ends on a pretty positive note.  This is a book that will make you smile, and cry, and have all the feels.  My only complaint?  I really wanted more with actual snake handling.  :-)
Posted by Lisa Mandina at 7:00 AM