Review: Until We Meet Again by Renee Collins 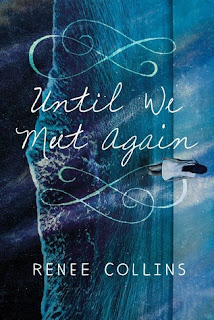 First thanks to Sourcebooks for sending me an advanced reader's copy of this book.  I hadn't heard much about it before that time, but the synopsis definitely had me intrigued.  As those of you who have followed me know, I've been kind of swamped with all the egalleys that I had been requesting,  and so unfortunately I didn't get to this one until this week.  But hey, at least my praise for it and review can get people reminded that they need to go out and give it a read!

The main character, well we kind of have two actually, and different chapters are told from each of their viewpoints.  But really it is Cassandra who we get most of the story from. Cassandra is having to spend the summer with her mom and stepdad in a fancy house, with its own private beach, in a small town.  The small town thing is probably the biggest issue for Cassandra. She's away from her friends and stuck with what she thinks are snooty people.  People that her stepdad invites over for parties that she gets stuck going to.  At one of these when she's able to escape the party for a bit, she heads down to the beach.  When she gets there, she finds there is a cute boy, Lawrence, already there. That's odd because as I mentioned, it is a private beach, so no one else should be there.  Also, she's not seen him before, around town, and is is a small town.  He is dressed up, and does say he's from a party up where her house is, so she isn't sure. But he is cute, and nice to talk to.

It turns out that Lawrence believes it is 1925.  When the two of them both try to walk up to the house together, the other one disappears from their view. This is what kind of convinces them that they must really be from different times, and somehow the beach connects them.  In Lawrence's time, he is staying at the house with his uncle, and his uncle, and father, want him to go into law.  But Lawrence doesn't want to, he enjoys writing, poetry especially.  The two of them spend time together on the beach, and of course, really develop feelings for each other.

But one day when Cassandra goes back to her time and one of the guys she was friends with is all of a sudden nowhere to be found, and no one even knows who he is, she realizes that they've maybe caused a big time disruption.  So she goes to the library to do some research into the town's past.  And what she finds is that Lawrence's life is in danger.  But she isn't sure what she should tell him, and what  might mess up things even more.

This was a good story.  It wasn't necessarily time travel, because I feel like the beach was kind of an out of time, in between place.  And while I had kind of figured out what might be going on back in Lawrence's time, I still had no idea how they would be able to solve the problem without completely messing up the time continuum.  I also wondered if any of their theories about what was going on would end up working, so that maybe they could be together.  The story was solved in a good way, with an ending that I think was just right.
Posted by Lisa Mandina at 11:30 AM