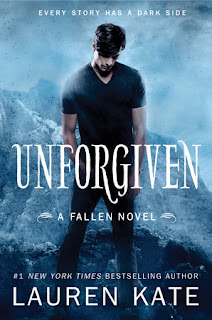 First, thanks to Delacorte Publishing and Edelweiss for allowing me to read an egalley of this book.  I just listened to books 2-4 in this series over the past month or so.  And then I saw this pop up on Edelweiss and I was very excited to read it.  I really have to say that I wasn't disappointed, it was a good story, and definitely a good addition to this world.  I did have one issue, that kind of kept it from being a 5 star review on Goodreads, but I'll mention that at the end of my review.

So Luce and Daniel had their ending in Book 4.  And I really like the way we pretty much got to know how the rest of their story would go.  But how many people kind of wondered about Cam?  Cam, the bad boy, the one who started trying to seduce Luce in the first book.  In book 3, we got a glimpse of a romance that may have led to Cam being the angel he is when we first get to know him. A girl named Lilith, who he had been going to marry a long, long time ago, bibilical days I would guess.  They ended up not getting married because she would only get married in a church as that is what her family would expect. But see we learned in book 4 that the fallen angels could not go into churches.  So since he couldn't do that, they fought, because he wouldn't tell her why he didn't want to get married in the church, and they split up.  Now the story Cam had always told, isn't quite what happened, and we learn the true story in this book.

Cam finds out that Lilith is in hell, because of a deal she made with Lucifer.  And her hell is basically growing up over and over in the worst lives, and never being able to realize her dream, and then once that is over, she starts all over again.  I think that her different hells never last much longer than the amount of time Luce would get before she would die.  Cam decides after all that happened with Luce and Daniel, that maybe he wants to try again with the girl that he's never forgotten.  And so he makes another deal with the devil. That if he can get her to fall in love with him before the current hell she is in ends, he will save her from ever having to go through that again, and also get to be with her.  But if he loses, then he has to go to hell, never to leave, and to be Lucifer's right hand man.

Of course Lilith is in high school, and she is an outcast, no friends, a family with no father, a mother who is not very nice, and a younger brother with life-threatening health issues.  Cam remembers how much music was a part of Lilith before, and as her sees her here, she still loves music.  And so he enters high school, and tries to get her to start a band and perform.  Deep inside Lilith though, is the hate that she doesn't remember, but whenever she sees Cam, there is something in the back of her mind bringing it up.  And just when it seems like things might be going well, Lucifer drops in, and starts setting more obstacles in Cam's way.  Like for one thing, Cam starts aging, pot belly, losing his hair, wrinkles, and even worse, he starts getting goat/demon hooves.  Fortunately he is able to hide his feet in boots.

Cam must overcome all the obstacles and still win Lilith, basically by the prom in this hell she is in.  So many ups and downs, every time Cam seems to be ahead, some new obstacle pops up, usually put into motion by Lucifer.

As I said, a great story, a great way to spend more time with Cam.  While I always rooted for Daniel in the other books, you definitely are rooting for Cam to get the girl this time.  And after what we learned about Lucifer in the last two books, I so wanted to be able to step in and punch him every time he caused problems.

Okay, the one thing I didn't like, well I don't feel like I got a good closure, don't know what happens to the two at the end of the book like we did with Luce and Daniel.  Will they get to be together?  On Earth?  In hell?  In heaven?  I need to know!  I would love another book, although I'm not quite sure that it would take a full novel to finish the things I want to know.  Not a cliffhanger ending, just not all the things I want to know.  This is a great series, and I can't wait until next fall when the movie for the first book comes out in theaters.
Posted by Lisa Mandina at 7:00 AM