Review: Persuasion (The Heirs of Watson Island #2) by Martina Boone 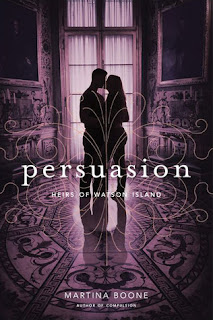 First I have to say thanks to Simon Pulse and Edelweiss for allowing me to read an e-galley of this title.  I am still on the lookout, however, for a physical ARC of this title to match the physical ARC I have of the first book in the series, Compulsion.  So if you know of where I might be able to find one, let me know!  Anyway, can I say that once again I loved the book!  I was sucked right back into the story as soon as I picked it up.  If you haven't read the first one yet though, I can't promise there won't be spoilers here.  So then you should stop reading here and click the link above for the review of the first first book to see if it sounds like what you'd like to read.  Now, on with the review.

When we join back into the story, Barrie is on her way home to Watson's Landing from picking up her godfather's ashes.  Eight and his father went with her.  When they get back they can see that it has kind of turned into a circus as people are just waiting in boats to see the ghosts that they've heard about.  It's become so bad that Barrie's aunt has had to close down the little tea room on the plantation to keep people out.  And when they first get out of the car, Cassie sees this guy standing there.  No one else seems to see him, and he just disappears before she can find anyone to show him to.  But there are footprints left where he was standing, so it seems proof that he isn't just a ghost.  The yunwi are scared of him, and throw things at him whenever he is around.  His name is Obadiah, and he does come back and offers Barrie a chance to be rid of the curse, her connection to the plantation.  But only if she doesn't tell anyone about it.

Cassie is probably going to jail, but after seeing how Cassie acts at her father's funeral, Barrie decides that maybe she should get some leniency. And so in front of the judge, Barrie speaks up for Cassie.  It turns out that Cassie had told some archaeologists that they could come and dig at Colesworth Place.  Even though Barrie knows that what is buried there probably isn't gold, what she feels tells her it is more something sentimental than riches would be.  It seems there is a lodestone there that Obadiah actually wants to help get rid of the curse.  And he needs Barrie to use her power to find it.  But when they go to do the search, something happens during the spell that he seems to be doing, and all of a sudden Cassie and Barrie are seeing what looks to be the past at the Colesworth Place, at the end of the Civil War.  What they see is the ancestors being pulled out of the house by the soldiers from the North.  From this vision, or time travel, whatever it is, Barrie learns something more about what might be buried on the property.

All of this is going on at the same time that Seven tells Barrie she must convince Eight to go away to college. That he needs his time away, because once Seven dies, Eight will be stuck there the way Seven is.  And while Barrie knows it is best, it is hard to convince Eight that she wants something, that really deep down, she doesn't want.

Meanwhile back at Watson's Landing they are preparing to open a restaurant where people will eat there by invitation only, to try to cut down on all the people coming in and causing problems.  Her aunt decides they need horses again, and follows through on that.  Barrie learns to love her home, where she cannot be too far from without being in pain, headaches really, until she gets back.

So much happened in this book!  I know I can't possibly give a really good overview without giving too much away.  And the ending, I just about cried, and I can't believe that is where it ended!  I don't know that I can wait another year for the next book, and oh how I hope it's not any longer than that!  Another great read, definitely give it a try if you get the chance!