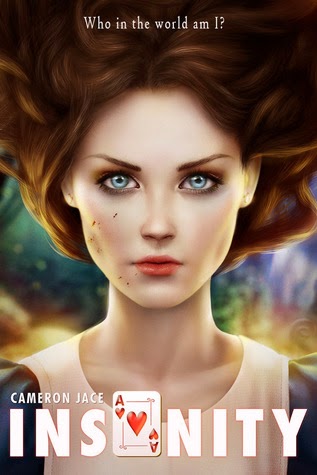 Thanks to Xpresso Tours for allowing me to read a part of this as part of a tour.  As I've mentioned many times on here I am really a fan of fairy tale or other classic story retellings.  Honestly though, Alice in Wonderland was never one that I had really read all the way through.  My interest in the story though changed once I read Splintered by AG Howard.  I love her series.  While this book doesn't quite live up to what I loved about that series, it still had a very unique new look at this classic story, as well as the author and his history and other stories.

The main character is a girl named Alice, and she is in an asylum.  She's in an asylum because supposedly she killed  a whole school bus full of her classmates and friends, and all of it because she said there were creatures from Wonderland who had actually been there and caused the bus to crash.  But Alice can't remember most of this.  In large part she can't remember because of all the shock therapy she's been subjected to while in the asylum.  There's another person in the asylum, Professor Caterpillar, who goes by Pillar, who also claims to be from Wonderland.  And he is a serial killer.  And doesn't pretend not to be.  He also has his ways of escaping the asylum with no one being the wiser until they discover he's gone.  What's even weirder about it is that he always returns, and lets them "lock" him up in his cell again.

Outside the asylum there have been murders of young girls.  All the girls have been left with huge "Cheshire Cat" grins on their faces.  Very unnatural grins.  Pillar believes that it is the work of the actual Cheshire Cat, and he believes that Alice is "the" Alice from the stories.  And he thinks she can help catch the cat before he gets whatever he is after. While Pillar doesn't necessarily care about saving the girls, Alice does, especially with the first girl she saves, Constance.  Together Alice will work with Pillar to try to catch the Cheshire Cat and end not only these murders, but also stop him from causing the end to all humankind.

What I liked was all the ways the mythology of the original story was related back to things from Lewis Carroll's life.  The history of Carroll's life and writings, all of that was fascinating, and I wonder how much was real, and how much was embellished.  It makes me want to learn even more about the author.  I also liked the character that was kind of thrown in as a love interest, Jack Diamond.  I hope to see more of him in the next story in the series, and I hope he does turn out to be a real love interest.  I will read on some day in this series I'm sure.

What I didn't like are just a few things.  I feel a lot of time was spent in the story just telling us all the history and other background things.  While they were important to the story, definitely, and yes they were interesting, sometimes it felt like there were too many "info dumps."  I also saw a few grammar and spelling errors, that I don't know if my copy I got was maybe pre-editing, or else hopefully those types of things were looked at closer in the 2nd and 3rd books in the series.  For the most part these errors didn't interfere with the story, and that is really all that matters.

If you are a fan of the Alice in Wonderland stories, or other stories/poems by Lewis Carroll, then I think you could really enjoy this.  Also fans of retellings like I am, or people who enjoy very unique takes on stories and themes, should probably pick this series up and give it a shot.