I have to say thanks to Fantastic Flying Book Club for allowing me to take part in this tour. And also thanks to the author and publisher who ended up sending out physical ARCs instead of just e-galleys.  It's such a pretty book I'm glad to have a physical copy of it to keep.  I'm going to share my review first, then I'll share the Official Playlist from the author. After that will be all the information you need to enter the giveaway, as well as how to get to the rest of the stops on the tour. 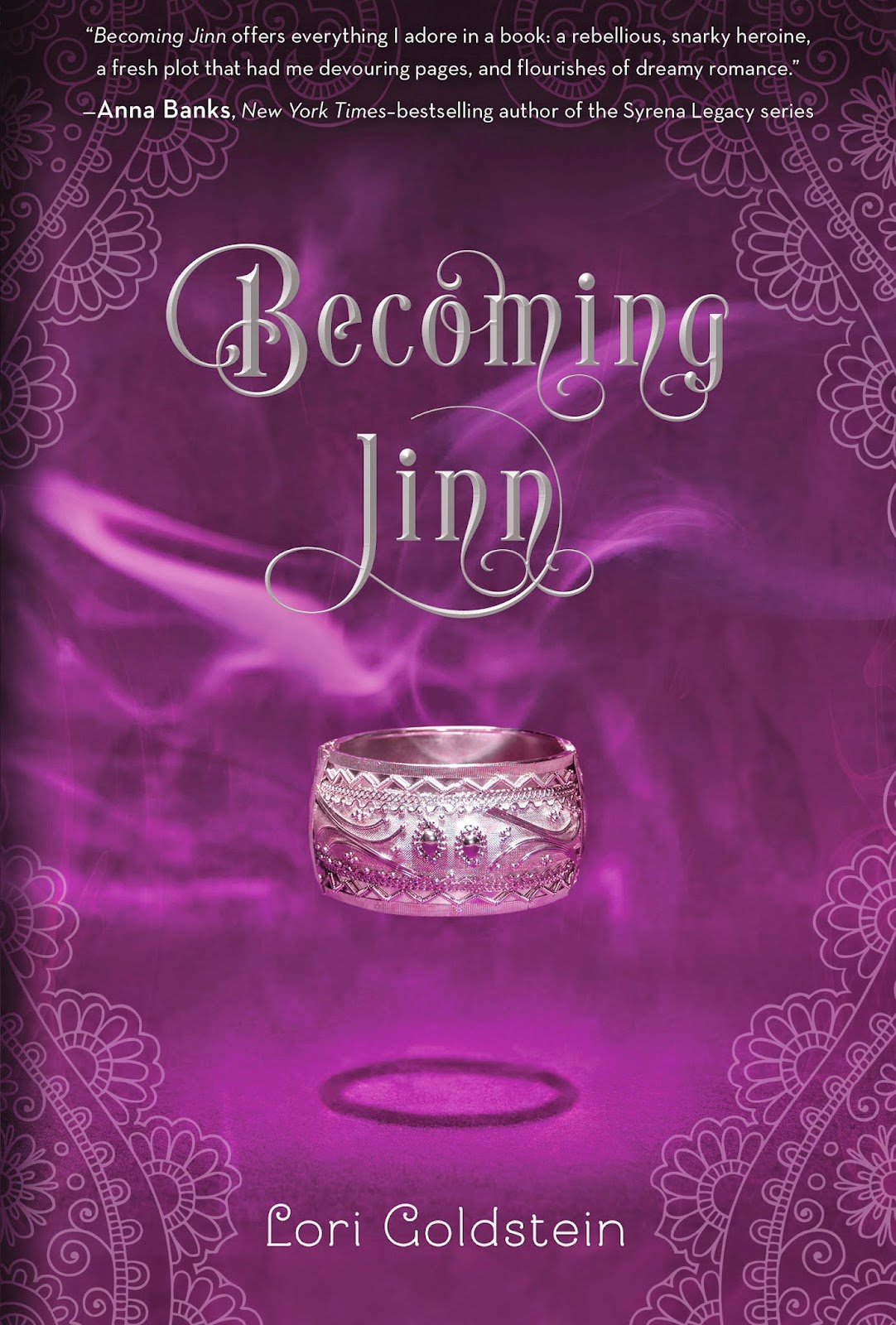 Becoming Jinn is a very unique story about Jinn, or what we think of as genies.  At least I felt it was unique as I hadn't read anything like it before.  The main character is Azra, and it is her 16th birthday.  The day that all female Jinn finally get their powers and are able to grant wishes.  Only Azra isn't very excited about it.  In fact she's tried to find a way out of having to do this her whole life.  Ever since her best friend Jenny, just a normal human girl, but one that shared her same birthday, died while they were playing, and her mother who was a Jinn was unable to save her, she's not wanted anything to do with it.  She has always thought it made no sense that the Afrit, the leaders of the Jinn, are the only ones who get to choose who will get wishes granted.  And her mother has always been able to heal her little injuries, so it doesn't seem fair that she couldn't save her friend.  On her 16th birthday Azra gets a silver bangle bracelet that gives her the power to use her magic.  She also becomes a part of a Zar, a group of five other girls around her age that will be like her sisters, and that they will all work together to help each other with each wish assignment as needed.  And she's grown up with the girls, Yasmin - kind of her archenemy, Hana, Mina, Farrah, and Laila - the youngest and really the one she's always been closest to.  They've been like cousins, with their mothers who are part of their own Zar as her aunts.  But none of them, other than Laila, showed her any sympathy when Jenny died.  In fact they acted as if it shouldn't matter, that only they should matter.  But now Azra will have to become closer to her Zar sisters as she can't tell anyone who is not Jinn about it.  That is until the neighbor boy, Jenny's older brother Henry, sees things happen.  Items in the house floating from one place to another, people just appearing out of nowhere (apporting).  Henry becomes a good friend knowing all about the magic.  He is someone she can talk to when she doesn't feel like talking to her Zar because they're not really that close.  It's good to have someone to talk to because of messing up her first few times, and what that could do to her. The punishment that she could get for messing up.  But Henry is just a friend, her love interest is Nate, who works as a lifeguard down at the beach where Azra will have her first summer job.  As her first assignments begin showing up, it seems like the Afrit are trying to make her life miserable, by making the assignments as hard as possible, with as little time as possible. And when her first big mistake catches their attention way quicker than she would have thought possible, Azra will have to work her way back into the silver bangle bracelet and prove she can be a model Jinn like her mother.

I really enjoyed this story, the characters were all really good.  At first I didn't completely agree with Azra's dislike of being a Jinn. But as the story went on and more was revealed about all the rules and other background stories having to do with her father and other people in her world, I was more on her side with that.  And it will have a sequel, so I am eager to see how she handles the wish that she was left trying to figure out how to grant at the end of this book.    Oh yeah, and my favorite quote:  "aluminum-flavored skunk urine" or as you might know it as, a can of beer.  I am not a fan of beer, so this is an almost perfect description for what I kind of think it tastes like.

Okay, enough from me, how about a playlist from the author herself?  Here you go, enjoy!