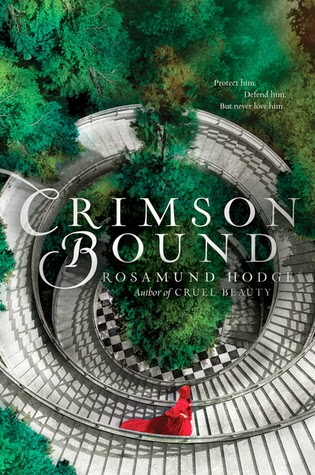 First, thanks to Edelweiss and Balzer and Bray/HarperTeen for allowing me to read an egalley of this book.  I actually have an ARC of the book before, Cruel Beauty, and for some reason I hadn't gotten around to reading it yet.  But after reading this one, I'm really looking forward to getting it out and reading it as soon as I can.  This is another fairy tale retelling, although it is a combination of two according to the author, one that I haven't read.  The two she lists are Red Riding Hood and The Girl With No Hands, which the second one I haven't actually read, although I've heard of it more lately, so I should probably find the original tale and read it.

The main character is Rachelle.  The Red Riding Hood part is that she apprentices for her aunt, and when she goes to visit her she is stopped by what is called a forestborn.  She thinks that she has to give into him in order to save her aunt or her family, but instead it doesn't work.  Once you are marked by a forestborn you must kill within three days or you will die.  She gets back to her aunt's place to see that she has already been almost killed by the forestborn, and so she chooses to put her aunt out of her misery, and that in turn saves her own life.  But she must leave now, as a bloodbound she is a threat, and most people will kill her, especially once they know she killed her own aunt.  She leaves and is taken into the army that serves the King, they are all bloodbound, but their job is to search out and kill the monsters, and the other bloodbound that refuse to serve the king and keep the people safe.  Rachelle hates this.  All she can do is try to make up for the horrible thing she's done.  And she feels working for the king will do this.  Or is the closest thing to it that she can do.  She works with her captain, Erec, who also seems to want her more than just as one of his soldiers.  But she doesn't want to be just another girl on his long list.  And then comes Armand.  Armand is an illegitimate son of the King.  He claims to have been attacked by the forestborn, been marked, but refused to kill anyone.  And so they took his arms, but somehow he survived. Because of this the people think he is a saint, that he was able to escape death.  And the King seems to want him around, possibly as the future heir to the throne.  Somehow Rachelle ends up having to guard him.  When she learns of a a sword that might be able to end the Devourer, the evil master of all forestborn, she decides to go ahead and try to find it and kill him.  Unfortunately it seems the King and Erec, are set on having her guard Armand.  Fortunately, she soon learns Armand may have some knowledge that will help her find the sword.  And it may even be at the place they are traveling.

Rachelle must fight her disbelief of Armand's story, along with the feelings that are growing the more time she spends with him.  And then there is Erec, always there trying to wile his way into her life as more than a friend.  In the end she will have to decide who she can really trust, and it may not be who she thinks.

I loved the mythology of the story, and I grew to really like the characters.  I don't feel there was insta-love, so that is a bonus for some I know.  The love developed more likely, even though there is a point when they feel it may have just to do with the danger of the situation.  And it is such a neat setting and a neat way to wrap up the story.  A great fairy tale, or two, retelling once again.
Posted by Lisa Mandina at 8:00 AM