Review: Be Not Afraid by Celilia Galante 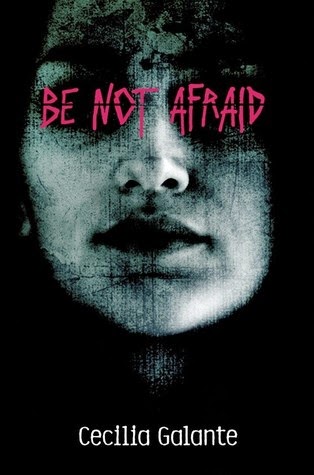 First, thanks to Random House Books for Young Readers and Edelweiss for allowing me to read an e-galley of this title.  Obviously the cover is pretty creepy looking.  This is a great horror story, much better than I was expecting, which I know is horrible to say, but I'd never heard of the author, so wasn't sure.  I was definitely pleasantly surprised.  I could totally see this as a movie, in fact I'd be very excited to go see it.  If you know someone who can get it turned into a movie, get it to them!

The main character is Marin.  Her mother committed suicide about a year or so ago, and right at that time she started seeing colors and shapes inside of people.  She soon figured out she was seeing their pain.  No one believed her though, even after she went and saw many therapists and even regular medical doctors.  Her father moved the two of them to live with his mother.  She's got one friend, Lucy.  She thought maybe she'd have another, when one of the really popular girls invited her over shortly after she started the new school.  Instead that visit ended up in Marin being locked in the closet by the girl, Cassie, and screaming and yelling to be let out until Cassie's older brother Dominic heard her and let her out.

All the different pain colors that Marin sees are so bright sometimes that she has to wear sunglasses, or in chapel she tries to read a book, until one of the nuns takes it away.  It is while they are in this mass that all of a sudden Cassie stands up and starts yelling that the communion wafer is hurting her and screaming and having almost a seizure. And as she goes down the aisle she stops right in front of Marin's row and points at Marin and says something about "It's You!"  Then she does fall on the floor and have a major seizure.  Everyone is freaked out of course, including Marin, who gets sent home early because of being traumatized.  When Marin decides to go see her friend Lucy, who has been calling and texting constantly, she is waylaid along the way when Dominic shows up.  He says that Cassie has been asking for Marin, and he's hoping that maybe if she sees her, it will help her feel better or at least calm her down.

For some reason having Marin around helps Cassie, when it's not sending her into major fits.  There seems to be something inside Cassie though.  Marin sees a black shadow inside her, something she's never seen before.  And this black thing moves around, and hides at times.  Soon Dominic and Marin will begin to think that Cassie is possessed by a demon.  And Dominic will feel it is up to him to try to save his sister.  He and Marin will grow close in their trials with this.  In the end there will be evidence to where the demon came from, and Marin and Dominic will even ask the priest from their school to help with an exorcism.

A great story.  All the normal things you expect with possessions, and even a lot of the tings for exorcisms.  I really liked it.  I really mean that I could see it as a horror movie.  It definitely reads perfectly like many that I've seen.  If you like stories of exorcisms and demon possession, this is a good one!
Posted by Lisa Mandina at 10:00 AM