Review and Giveaway: Bones and All by Camille DeAngelis 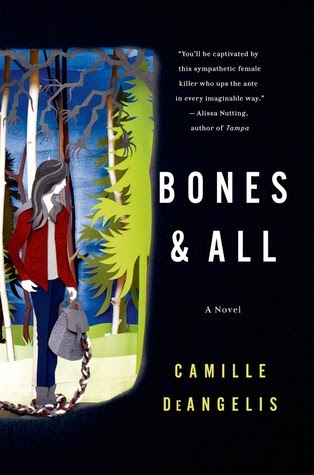 Thanks to St. Martin's Press for sending me an ARC of this title and letting me sign up for the Street Team!  This was a very unique read.  I actually went through several thoughts about this story as  I read it.  I started out very excited, followed by wondering if I was going to really get into it, then I figured out what was kind of going on, then I felt the love, then I was sad about the love, and at the end I was pleased with the story over all.

The main character is Maren.  Maren has a deep, dark secret.  Basically you'd call her a cannibal.  But not one that cooks and eats the meat of a human like you'd think.  No, once she starts, it is only mere  minutes before there is no trace of the person left, other than any blood that might get on her clothes or the person's clothes.  Bones and all are gone.  It happened first when her mother left her with a babysitter as an infant.  Of course she has no memory of that.  The next time was a boy at summer camp.  Every time it happens her mother has to move them. While there really isn't any evidence left to prove that Maren did what she did, it is just safer.  When the story really begins, Maren is 16, and she has woken up to find a note from her  mother, who has left her on her own.  The note also includes a copy of her birth certificate.  Maren knows her mother has gone to her parents, grandparents she's never met.  But she also wants to meet her dad.  Her mom  has left her money, and she used the money to buy a bus ticket to where she knows her grandparents are.  She finds her way to the house and looks in the window. She sees her mother crying, and knows that she is the reason.  At the grocery store a little old lady sees Maren and wants to help her out.  Asks Maren to help her home with her groceries and she'll fix her a nice lunch.  On the bus trip to the woman's house, Maren first sees the creepy old man she will come to know as Sully.

Sully will soon meet up with Maren, and she will find out she is not the only one of her kind.  Only Sully eats dead people.  He offers for her to come and stay with him.  But next she just wants to find her dad.  So she heads that way.  Only now she's kind of short on money.  So she tries hitchhiking, which only works so far.  She gets to a Walmart where she meets another of her kind, Lee.  Lee is a 19 year old boy.  And the people he eats are all "bad people".  And he helps Maren out even when she can't help herself and eats another boy that is trying to help her.  For some reason she attracts boys who just want to help her, and then she can't help herself.  She and Lee are able to get along and he promises to help her get to see her father.  They run into Sully along the way.  And while Maren still feels like he is trying to mentor her and be her friend, Lee doesn't trust Sully.

Maren will find her father, and of course her daydreams of getting to live with him are only that, dreams.  She and Lee will have a disagreement about what she should do, about Sully, about her dad, with her life.  She will fall in love, she will meet her father, and that will be a touching moment, even if it's not all she dreamed of.  There will be young love, and there will be heartbreak.  And in the end, it of course can't really be happily ever after, not for someone who eats people.

A very unique story as I said.  We don't really get much of a glimpse into the actual eating of people.  We don't know for sure just why they do it.  We only know that it isn't just Maren, that there are other people in the world, maybe more than ever would be imagined.  And in the end, we will root for Maren, knowing she can't help what she does, and that for the most part she is trying to stop herself.  You'll root for young love, and hate when the heartache comes.  At least I did.