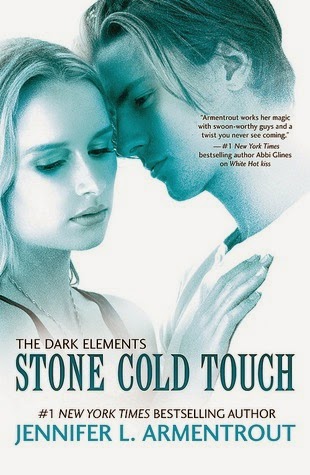 Okay, once again prepare for a love fest.  I am hooked now on Jennifer L. Armentrout's books.  Being able to read the first one, White Hot Kiss, and then this 2nd one right after it, is going to make it very hard to wait until the third one, Every Last Breath, comes out this July.  In fact, I kinda wonder if they'll be giving copies of it away, ARCs, at BEA this summer.  If only I could: A. afford to go again this year, and B. not already  have plans for the weekend it is happening this year.  Of course, the first two I picked up as strip cover copies at my bookstore, and since I'll have to buy the 3rd one, guess I'd better start planning to buy the first two so I can have a matching set.  :-)  And of course I'm also even more sad that I was unable to meet her last summer at BEA.  :-(    Enough of my fangirling and moaning, let's get on with the review.  Which if you haven't read the first one, I can't promise no spoilers at all from that story.

Layla is back.  But she's devastated after Roth sacrificed himself to make sure the demon they were trying to send to hell didn't get away, also saving Zayne in the process.  But it meas that Roth was now stuck in hell.  There is one thing Roth left her though, that keeps him close to her at all times.  His familiar, Bambi. The snake is now a tattoo on her body.  And while she and Zayne seem to be getting closer now, Bambi likes to show up as a reminder to him about Roth.  And while things seem to be maybe becoming a possibility that she never dreamed of for her and Zayne, other parts of her life are changing.  For one thing, all of a sudden one day she can no longer see the auras of people with souls.  But she seems to be feeling or sensing other people's feelings when they touch her or get close to her.  That's not all that's going on, it seems there are more upper level demons around town.  And when a surprise shows up, Roth, (you had to know he couldn't be gone!) they learn that a Lilin was created somehow even after all they did to try to prevent that from happening.

Meanwhile Abbott, Zayne's father, and Layla's adopted father, seems to have been keeping even more secrets from Layla. And he no longer seems to have much trust in her.  To the point where he even thinks she is behind the bad things happening.

Of course it all blows up at the end, when Layla begins to think that just maybe she is at fault for the Lilan, and she hurts someone she never dreamed or wanted to hurt.  She will have to turn to Roth and her friends Stacey and Sam to try to solve all of this and save the world.

Definitely another bit of a cliffhanger with the end of this one. Although the person who ends up being the Lilan, well I suspected something about them early on that led me to believe there was something else going on with that person.  And while I'm glad that she got to be with Zayne, there is just something about her with Roth that I kinda like better.  And I want to address the whole love triangle thing. With all the talk and hatred about love triangles, I feel I have to point out some things. First, many, many books have them, even older classic ones.  Think about Gone with the Wind, there's Ashley and Rhett.  For movies, how about the original Karate Kid, Daniel and Aly and Johnny.  And again, as fiction, it feels good to have two guys you want, both wanting you.  At least I would think it would be, well in a fictional world.  So I'm okay with it when it's done right. And this book definitely is.

Okay, I have to hop back on the love train here, I LOVE the Buffy the Vampire Slayer and Supernatural tv show references.  How did I never realize that the reason Dean's car is what it is on the show is partly because the trunk is big enough to hold not one, but TWO dead bodies?  I love it!  I think I could totally hang out and watch these shows with the author and have a great time.  Anyways, enough about that again.  If you haven't read this series, and you enjoy a good paranormal YA story, with great characters and dialogue, then what are you waiting for? Get out and get your copies today!
Posted by Lisa Mandina at 8:00 AM