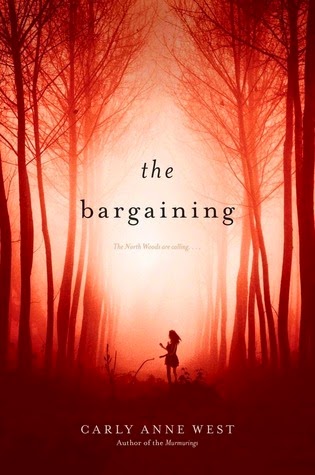 First, thanks to Simon Pulse and Edelweiss for allowing me to read an e-galley of this.  I didn't remember that this was a ghost story, or I might not have read Horrorstor right before it.  This book also had some pretty scary scenes in it.  Not that it's a bad thing, just that I don't always want to read the same kind of books back to back.

The main character is Penny, and Penny is what you'd call a troubled girl.  She lives with her mom and has recently been part of a big tragedy where her "best friend" died, as well as another girl getting beat up.  We don't know exactly what happened, although we get filled in a little throughout the story.  Her mother is done with her though, and ships her back to her dad when Penny beats up another girl at school.  The only part that Penny can really stand at her dad's house is her younger stepbrother Rob.  Well when summer comes around her dad has to go out of town for business, and her stepbrother has soccer camp, so she ends up having to go help her stepmom April flip a house up in a small town in Washington state.  The house is nestled in the woods, pretty scary looking woods.  April wants to turn it into a bed and breakfast.  Now April is pretty understanding and nice to Penny.  But Penny starts seeing weird things before they even get to the house.  She's been having hallucinations with her dead friend for awhile, and they get even weirder in the forest.  And when they get to town the people in the town are very unfriendly once they find out what house April and Penny are going to live in.

There is a cute boy in town, Miller, but he has a connection to the woods, to the very house that they are living in. Miller's family, along with a few others have a secret.  And it has to do with his older brother, along with some other kids who disappeared into the woods, and when they returned, months later, they were changed.  Most of the kids and families moved away from town.  But Miller is still there because he feels it was his fault what happened, and he wants to make it right.  So he is fighting his own demons, just like Penny.

There were definitely some scary moments, and what could have been a really good back story.  But I feel like while we kind of got the story, I was still a little unsure about what exactly happened.  I don't know if I read through some part too fast and missed it, but I was left with a few questions unanswered.  That left me a bit unsatisfied with the story overall.  I did like the way it ended, very horror movie-esque.  So, if you pick it up and read it, for a great scary story, and you don't have the same questions left that I had, would you come back and let me know so that I can ask you about those things?  Read this for a good scary story for sure!  Oh yeah, and she moved with her mom to Phoenix, and then goes back to her dad in Washington state?  Twilight details much?
Posted by Lisa Mandina at 3:21 PM