Review: Beautiful You by Chuck Palahniuk 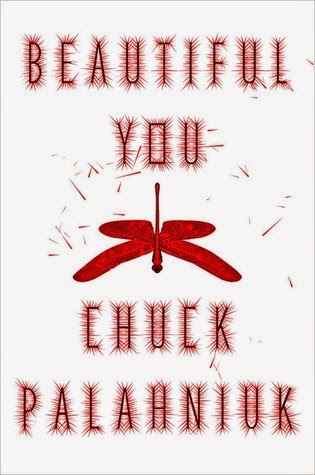 I checked this book out through the awesome employee benefit at my bookstore.  Hardcover books with dust jackets we are able to check out if we leave the jacket and sign it out with a manager.  This was my first book by Chuck Palahniuk, although I have seen the Fight Club movie, so I figured it would be a kind of weird book.  It definitely was a different type of book.  And definitely a very, VERY adult book.

The book is about a man who creates a new line of female sex toys and products, called Beautiful You.  These products are so good, that women line up for blocks and blocks from the door of the stores to get in and buy them. And when they do, they disappear into their bedrooms, and don't come out other than to replace broken items, or buy new batteries.  It is so bad that they don't eat, they don't go to work, some even leave their  homes to go where they won't be disturbed by their loved ones, men and children, who don't understand what is going on.  The story is more than that though.  It is told through the viewpoint of Penny, who is somewhat of a Cinderella story with C. Linus Maxwell, the creator of these products.  She meets him when she is kind of a gofer at the law firm where he is going through a case with his last girlfriend, a famous movie start.  He has been linked with many powerful women, including the first female President of the United States.  And of course he is known as a major playboy.  When he sweeps Penny off her feet like Cinderella, it is with a bit of a strange change into the fairy tale.  He puts her into a plush hotel suite where he brings her to new heights of sexual pleasure, the whole time taking notes on how she reacts and how certain things work, and trying out new devices on her.  But, as with every other relationship, on the 136th day, it is over.  He sets her up moneywise, so that she will never want or need anything.  But Penny is different, at least she thinks she is.  She sees how women are being basically taken out of everything.  How the women who buy all of these products then also are sucked into buying everything else that may be sold by the same company or offshoots of the company.  Ugly shoes, the same "vampire novel" (obviously a potshot at Twilight), same foods, cleaning products, etc.

I won't go into much more.  Just have to say that this is a majorly intense book.  The sexual bits are nothing held back.  You hear how all the toys work, you hear what parts of her body he is doing things to, you hear about their sex, you hear about fantasies, it is all laid right out in front of you.  I loved that when one little mystery was revealed, and you were like, "Oh!  Okay!  That makes sense," that wasn't the end of the story, there were more and more secrets to be revealed.  Even at the end, kind of the last one, it was perfect.  You could totally tell it was written by a man, but it was very stimulating to read as a woman.  Very sexual, sensual, sexy.  Not sure if I'll pick up any of his other books, but I can totally see why so many people like his books, even people who I know don't really read other than his books.  He is a good writer, knows how to keep your attention, I think he surprised me, even when I started the book and got into the story and got to thinking, well that makes no sense, I can't imagine any woman being that into the pleasure that they would not eat or go to work, or do ANYTHING else.  But it all works as you read on and find out just what is really going on.

One last note, while I "got" what the cover represented, a specific toy, I didn't really "get" everything about the cover until I got further into the book.
Posted by Lisa Mandina at 8:00 AM