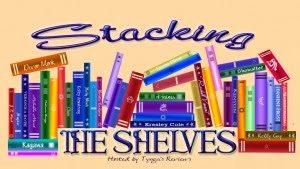 Stacking the Shelves is hosted by Tynga's Reviews.  It is a way for us to share the new books we have collected.  This week I visited Half Price Books for the first time, as well as finally getting the books I was waiting on for the library, so I have some physical books to share for a change.


So the first one is a sequel to Dualed, a book I wasn't quite sure about, but do want to see what will happen next, and the 2nd one just sounds pretty interesting.

Borrowed from the Library:

Both books I had been on the waiting list forever.  One I was supposedly next on the list to get it, but it came after the other one, within a day.  So I got them the same time.  I think I'll spend my Valentine's Day reading the 2nd one as I know it will be a quick read.

Purchased at Half Price Books:

Both of these are a little bit older, but ones I still have wanted to read.  I must say I was a little disappointed in Half Price books.  Some books for sale, not half price.  Then, I brought over 20 books in to trade, and only got $6 for the.  I know they have to make money, but since I didn't see a single book for less than $1, I would think giving me at least 50 cents per book would have been fair.  Oh well.  They were books I either wasn't ever going to read, or ever read again, so $6 is better than nothing.  I put it towards these two books, but still had to cough up $9 of my own money.  Also, I found an ARC on one of the shelves.  I brought it up to them, and all they would say is that sometimes they missed them.  Um, how?  You look through the books before you buy them, and it says it right on the cover.  I'm sure they put it right back on the shelf after I left.

Enough about that, I'd say it was a pretty good week for me.  How about you?  What books did you add to your shelves this week?

And don't forget to enter my Romance is in the Air Giveaway HERE.
Posted by Lisa Mandina at 11:36 AM