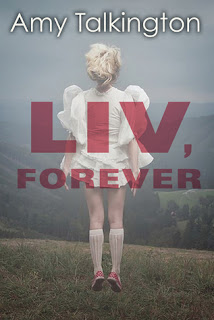 Thanks to Edelweiss and Soho Teen for allowing me to read an e-galley of this back in November.  I must say I really enjoyed this book!  Such a great ghost story, with a mystery to be solved.  And really, the romance between Malcolm and Liv carried over into my dreams the night I finished the book, leading to a wonderful dream!
Liv Bloom is the main character.  She is an adopted child who has gained entry into a very exclusive private school, Wickham, one she wants to attend for the awesome art program.  She has never felt she fit in, while she lucked out with her adopted parents, she never felt that they really got her.  Before she was adopted her time in the foster homes also led her to feel that way.  And right away at the new school she is even made to feel that way by the girl who is kind of the resident advisor of the hall where Liv will be staying.  But, the first night there, while she ends up sitting with the school's reject boy, Gabe, who is also a scholarship student, she also gets singled out to dance with a guy who is probably one of the most popular in the school, Malcolm Astor.  Yes, those Astors, if you know that name.  Gabe and Liv work together writing down all the names on the memorial bricks in the spooky area of the school.  A place that Gabe sees ghosts. At first Liv doesn't believe him, until she starts seeing some interesting things herself.  And when Liv goes to her art studio, each student has their own!  Her teacher is wonderful, and finally she feels at home.  And it turns out that Malcolm is also an artist.  And they even get a chance to spend more time together, dates actually.  Even though Gabe warns her it can only lead to bad things to get involved with him, because Malcolm is involved with the secret society, the Victors.  And they have all these rituals and secrets.  I wouldn't normally give this part away, but since it is part of the blurb on Goodreads, I will tell you that Liv dies.  In a similar way to the little short chapters we get that are from the viewpoints of other girls that died at Wickham.  Now that she's dead, she must convince Gabe to help her figure out who killed her.  Malcolm seems to be very upset by Liv's death.  But the more you learn about the other girls' deaths, as well as the Victors, it makes you wonder how much he really might be behind it.
Let me say I was definitely on the edge when it looked as if Malcolm could be a part of Liv's death.  I just loved their relationship and I didn't want it to happen.  This was a true love between the guy with a lot to the girl who comes with nothing.  They even drew on each other using their artistic ability, and because Malcolm knew after the first real date he wouldn't be able to see her for awhile, but having her drawing on his body would keep them close.  Something she would keep on her after she died as well.  It was so hard for her to work to solve the mystery.  She had Gabe, who went to Malcolm to try to get his help, but Malcolm was unable to hear or see Liv, so it took a bit of proof to get him to help.
A really good story.  I had a lot of trouble putting it down to do anything.  I wanted to just do nothing but read once I started it, and had to find out if Malcolm was really this great guy that had invaded my dreams. I loved the secret society and learning about the past and how the school had changed from even the founders' ideals.  And really, the founders had the same kind of love as Malcolm and Liv, the really rich guy in love with the girl who came from nothing. Probably the only thing I didn't like was the cover of the book.  But, hey don't judge a book by its cover and all that, right?  This is the author's first novel, although I believe she is a screen-writer in LA, so it's not like she has no experience. But she brought that experience into a YA story perfectly.
Posted by Lisa Mandina at 9:00 AM