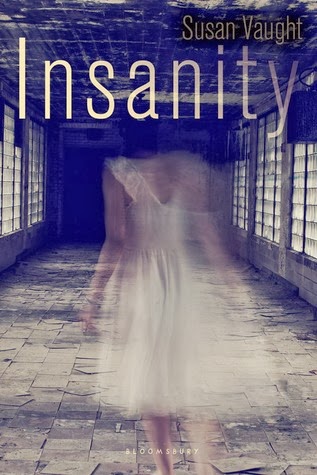 First, thanks to Netgalley and Bloomsbury USA Children's Books for allowing me to read an e-galley of this.  As you have to notice from just one look, the cover is what first drew me in to see what the book was about. When I read the synopsis, it sounded even better. While I've given it a rating of 3 stars on Goodreads, I actually would do more of a 3.5.  I almost gave it a 4, but had some issues that I just had to back myself down a bit.  But even with the issues I had, it is still a very scary book, and one I will definitely look into purchasing for the high school library where I work.  I will also highly recommend it to people who enjoy a good ghost story.

As I read one person's short review of the book on Goodreads, they mentioned about how it had multiple person point of view for the story.  And it does.  This reader had to set it aside on the 3rd person that it went to.  I can see how that could be a problem, although honestly, the characters did pretty much sound different as we read from their point of view.  And actually, we get the story from 4 different characters' points of view, going back to one of the first ones at the very end actually.

It starts with Levi.  Levi is out walking on a kind of scary night, and the bells of the local psychiatric hospital begin ringing.  According to his grandmother, you should never be outside on a night when the bells ring, because that means death is nearby.  And it is true, as Levi even runs into the killer that night after meeting a stray dog that he sees out following him.

The second point of view is Forest, a girl who has just reached the age where she is no longer being a foster child. She has just started a job at the Lincoln Psychiatric Hospital that we learned about in the Levi's part.  While she is there, she does get a bit spooked as she sees some pretty scary things.  In fact at one point, she learns she can help people passing on to the other side, quite helpful in the elderly portion of the hospital.  And when she goes to help a spirit, she ends up going to the other side herself.  And when she comes back, she finds that a lot of time has passed. So much that the woman who had really helped her at the hospital when she first started is now an elderly woman living in the hospital.  And so Forest is able to help her over.  She has met Levi now, and they are an interesting couple.  You see his grandmother that he mentioned in his part is a woman named Imogene who has been at the hospital for a long time, helping out with spirits, both good ones crossing over, and trying to keep the bad ones from coming out.

The third point of view is a boy named Darius.  Darius has just lost his 2nd grandmother, both of them had died at the hospital.  And as this last one passes away, she tells him something that will lead to some scary things happening as he starts his job at Lincoln.  She tells him that she tried to stop him, but he is still hungry and Darius will need to finish it.  Darius soon learns that his grandfather was a serial killer, killing little kids.  And his grandmother had killed him, or so she thought.  It seems his grandfather has somehow broken through and with the help of an evil spirit is trying to begin his work again.  Darius meets Forest and Levi, and they help him to try to finish his grandfather off for good.  Now here is what helped me keep going with all of the different points of view, all of these people were really connected more than any obvious way of being around or working at the hospital. One of Darius' grandmothers was Forest's friend that she'd helped pass on to the other side.  So now we see the connection.  We also meet Trina, Darius' girlfriend during his portion of the story.

The fourth point of view is Trina.  Yeah, obvious connection as the girlfriend, who also gets sucked in when Darius is trying to send his grandfather back to hell or wherever.  But, there is another connection even farther back, to the other two in the story, or at least back to Levi.  There is a connection between Trina's father, who is a pastor, and Levi.  A connection I'll let you read the book and find out for yourself.  And once again there is something going on in the hospital. Something even more ancient than what has been going on in the past parts of the story.

This book has so much action, so many good ghosts and back stories.  I loved how all the people ended up being connected in some way to each other, and even to the town and hospital itself.  Very creative and I'm sure took lots of figuring and planning on the author's part.  Now the issues I had, while there were so many back stories that ended up being connected in really great ways, there was something about having Madoc blood.  And I don't know if I missed that part in my reading, or just don't remember it, but while I knew it was something important, it was stressed throughout the story, I'm not sure exactly what it means.  Okay maybe that's my only issue, and actually, it could be my own fault that maybe I skipped over that part or just don't remember it, so I may have to go back to Goodreads and go ahead and bump my review up to 4 stars.  Don't you love how I talked myself into that through writing the review?

Again, great story, the cover is perfect and totally sets the mood of the book.  Yes, it is a scary haunted metal hospital, but it is more than that.  A unique storyline about witches and people who just have some sort of abilities to help the dead cross over, or try to stop the dead that have bad intentions when possible. I could totally see this as a tv series actually.  Someone call the SyFy channel and let them know!
Posted by Lisa Mandina at 10:00 AM