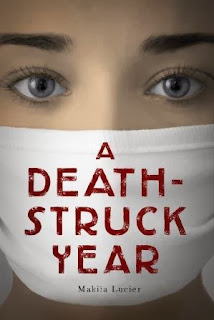 First, thanks to Netgalley and Houghton Mifflin for allowing me to read an e-galley of this back in December.  Second, I will admit that I didn't read the description that well when I first requested it.  For some reason I had in my head that it was going to be a book about a Spanish Influenza strain that hit in the present time, when in reality, it was a historical fiction piece about the time it did actually hit, in 1918.  So while it wasn't what I was thinking, it was still a good book.  Definitely one I would recommend a school library add to its collection.  In fact, it reminds me of another historical book I read a few years ago, this one about Typhoid Mary, called Deadly, by Julie Chibbaro.
A Death-Struck Year takes place in the Northwest part of the United States, Portland, Oregon.  The main character is Cleo Berry.  She lost her parents in an automobile accident when she was younger, one that she was in, and she witnessed her mother slowly dying as they waited for someone to see what had happened.  She now lives with her brother who raised her.  But he and his wife are going out of town for a second honeymoon type of vacation, and since she is only 17, and it is 1918, she must go stay at the boarding rooms of her school while they are gone, and is not allowed to stay home alone, especially since their housekeeper is also going to be out of town.  There have been rumors of this illness in New York, and Philadelphia, all places on the East Coast.  So Cleo and her brother aren't really worried.  But soon the stories have reached the West Coast, and soon the illness has arrived.  All the schools and other public buildings are closed.  Unfortunately if your family cannot pick you up, you have to stay, something that Cleo does not want to do. So she sneaks out to go home.  She also sees a notice that the Red Cross needs volunteers.  And so she decides to go help out while she is home alone.  To her, she wants to make sure no one has to sit and die while waiting for help, like her mother did.  Being a volunteer isn't that easy though.  In her first day she comes across a family, with little children, that she must get to the makeshift hospital that has been set up at one of the theaters that has been shut down.  She stays home alone, unbeknownst to her brother at first, as he thinks that the housekeeper is on her way back.  But the housekeeper ends up staying with her sick family.  Cleo meets a new friend, Kate, who is also working at the Red Cross.  And even finds a bit of a love interest with a military man who is serving as a doctor, Edmund.
While the story has a mostly happy ending, it isn't unrealistic, as Cleo sees more death, the collapse of a man about her age who was extremely healthy seeming only moments before he collapsed.  She has close friends that get sick, and even die.  And she even has her own health scare as she waits for her brother and sister-in-law to come home.  And Edmund isn't just a handsome doctor that she falls for.  He has a bit of a scary past as well, from what happened to him in the war.
Really this was a great historical story, and at the end there are even some notes about the actual history of the time.  As I said before, a great book for a school library, one I would add if I was in a middle school library.
Posted by Lisa Mandina at 10:00 AM