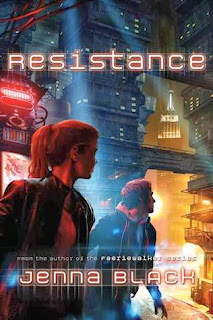 Of course I have to thank Tor Teen again, as well as Edelweiss for allowing me to read an e-galley of this in November.  And as I mentioned on Goodreads.com, this is one of those few times that I like the sequel better than the first book.  And I really liked the first book, you can read my review of Replica, HERE.  Okay, so if you haven't read the first one, there may be some, probably will be some spoilers here.
At the end of the last book, Nadia and Nate had stopped the Chairman, Nate's father, from continuing his evil testing of the people from The Basement, in other words, the poor people.  But in order to stop him, they'd had to hide away a recording of him giving away his plans.  Nadia had her sister Gerri hide it, but told her not to ever listen to it.  Nadia got arrested, and now is an embarrassment to her Executive family, so they send her to an Executive retreat to get her out of the press's eyes.  Unfortunately while she is there, the Chairman has a new plan, one that will insure that Nadia will probably be sent away forever by her parents.  He decides that he needs to boost the economy by making a match with another Chairman's heir.  Knowing that doing this will completely disgrace Nadia, no longer meant to be the wife of the future Chairman.  Nate tries to fight it, while also taking his anger out on the girl he is now meant to marry, Agnes.  Agnes is a plain girl, and very socially awkward.  Even when Nate tries to get her to say she won't marry him, she explains that while she may not be happy about the match either, she knows it is best for her father and her country.  About this same time, Nate's mother, who has been in a more private retreat for executives, passes away.  Nadia has been all by herself, her only communication has been Dante.  Who gets a secure phone to her so that Nate can make sure to let her know if she is in trouble.  But it becomes more than that.  He begins visiting her every night, seeing how lonely and stressed she is.  Things of course go from bad to worse, but I like that unlike many 2nd books in a trilogy, there is still a big face off at the end.  I will say that I kind of guessed who a certain person we meet when Nate's mother dies really is.  I was glad to see that I was correct!  I won't give any more of the story away.
Again, the love story isn't just Nadia and Dante, it is also Nate and Kurt.  I have tried reading another book with a gay main character, and it was harder to read.  This is just so normal, and really what seems to be a realistic relationship, that it is not something I even notice really as I read.  So great to be getting more stories like this out for teens.  Now this isn't a future where that is okay, in fact this whole relationship between Nate and Kurt is what started the whole series from the very first book.  I will definitely be getting these books for my school library.
Posted by Lisa Mandina at 10:00 AM