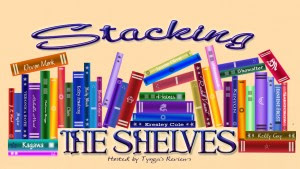 Stacking the Shelves is hosted by Tynga's Reviews.  It is a way for us to share the new books we have collected.  And I have a HUGE haul this week.  Well, it feels like it anyway.  First, I want to share something that I came home to find sitting on my front porch on Tuesday: 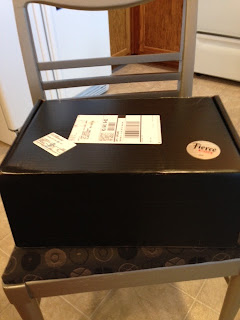 I saw this box, which as you can see has a Fierce Reads sticker on the lower right side corner of the top of the box.  And I was really excited because Fierce Reads are some awesome books.  Well when I opened it up, this is part of what I saw: 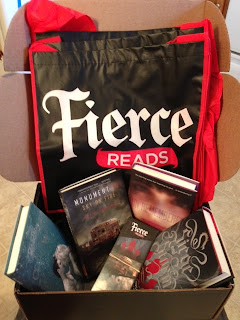 It is a kit to host my own Fierce Reads party!  Also containing four books, one of which I've been really, really, eager to read anyway!  And this is really exciting, because I'm hoping that maybe I can use this box as part of my new high school librarian job to help get kids in the library for reading other than research.  I'll be giving away the things in the box at that event if I'm able to have it.  But, I may have to read through at least 2 of the books myself before I give them away.  Is that wrong?  If you can't tell, the 4 books are:  Of Triton (Poseidon #2) by Anna Banks, Sky on Fire (Monument 14 #2) by Emmy Laybourne, Unremembered by Jessica Brody, and Siege and Storm (The Grisha #2) by Leigh Bardugo.  Sky on Fire is the one I'm really excited about as I loved the first one.  And I'd also really wanted to read Unremembered.  And if you remember from last week, I got the UK version of Shadow and Bone (The Grisha #1), so that is cool too. I guess just in case many of the students have read the first in the series for those sequels, I may have to get copies of those too to give away. 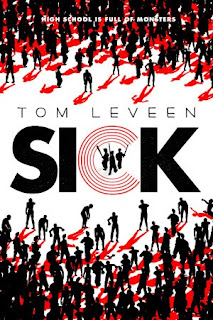 I've not read any other books by this author, but with the tagline of "Breakfast Club meets The Walking Dead," how could I pass up this zombie book?

From a Shelf Awareness contest: 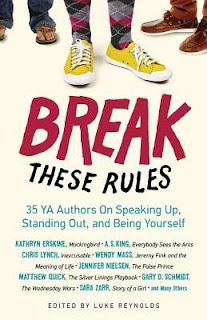 This looks like a great book for teens, and I did get some bookmarks to go with it.  Could be another book I give away as a librarian this year!

Traded for at YA Book Exchange:

It's been a while since I read I Am Number Four, but now I can add The Power of Six to my September is for Sequels challenge this year.  I heard a lot about Shards and Ashes at the RT Convention back in May, so when I saw there was one available on the YA Book Exchange, I immediately looked to see if I had anything from that trader's wish list.

Now, I really want to not have very many times that I post books I've purchased, as I really don't need to be buying anything. But, I am a HUGE Marx Brothers fan, and something I often do when I have down time at the bookstore where I work is search the database for new books on them.  This one popped up, and wasn't really that expensive, and so even though I already have 4 or 5 other Marx Brothers books sitting on my TBR shelf, I decided I had to have it.  The other book is another love of mine, dachshunds.  I'm always looking for new dachshund books at work also, and when I saw this in the computer, I had to order it and buy it too.  Aren't they so cute?!

Whew!  That was a lot to share!  What about you, what will you be adding to your bookshelves this week?
Posted by Lisa Mandina at 11:26 AM