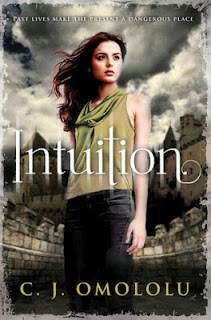 Once again I am thanking Netgalley and Bloomsbury Publishers for allowing me to read the e-galley of this book.  And I was jumping up and down and squealing because I was so happy when I got approved for this!  I had loved the first book, Transcendence, although, from my review, you can't quite tell that.  As I went back and looked at it, I can't believe I gave it a 4 out of 5 on Goodreads, and my very short review doesn't quite give me the answer as to why I did that.  The first book was the one book that I saw on a shelf at BEA last summer, 2012, and asked the person at the booth if I could have it, and they told me to come back the last day and ask.  So I did, and when I went back, a different person told me they would be doing the giveaway at 2 pm.  So I went back then, and guess what, they'd already given it away.  I was so disappointed.  But then, when I got to see the author at the RT Convention this past May, she was so nice!  And so of course, I had to buy it then.  Let's see if I can do a better review of the 2nd book.  Although I will try not to give away too many spoilers if you haven't read the first one.  If you haven't read it, you should go to my link on the title of the first book above and read that first.
We start the book back with Cole and Griffon.  They are able to be together now and are in love.  But Cole is now not sure of her future with the cello as her left arm was damaged so bad in the confrontation with Veronique in the first story.  Cole also came away with a scar.  But everything seems to be going perfectly other than that.  She is still able to teach students even as she relearns to play with her other hand, even the really annoying ones that don't want to be there.  But now the boyfriend of her ex-boss at the clothing store, Drew, has started acting funny.  Saying that they were together in a past life.  And when he touches her, with her empathic abilities, Cole sees the life he is talking about, and feels that he was her husband in that life.  Cole doesn't want to feel this connection as she is in love with Griffon and doesn't want to lose him for anything.  She is continuing her lessons with Griffon's mom to try to improve her empathic ability.
But Drew keeps coming back and pestering her.  And while at first she doesn't tell Griffon, when she does, he tells her she needs to give that connection a chance, and breaks up with her.  And not only is this going on, her best friend Rayne is being pestered by Veronique, who is trying to convince her that she is Akhet as well.  Shortly after Cole convinces Rayne it is not true, Rayne get seriously ill.  And it seems that Griffon and his mom and the others in their group can help.  Meanwhile Cole gets to know Drew better, and the Akhet that he spends his time with.  She gets to meet so many famous people, as well as people that were famous in past lives, and at least one other that she may have a connection with from a past life.
I'll stop there, just know that it has a lot of suspense and you have to wonder if Drew really isn't the perfect guy.  He's 20 years old, yet has millions of dollars!  Lives in a really fancy apartment, penthouse to be exact!  And he can buy anything.  Cole could have the perfect life with no responsibilities other than to be with Drew and have a family.  But is that what Cole wants?  She has to decide.  And it's not just a romantic story, as I said, they have to figure out why Rayne got sick, and what other things it might be leading to in the Akhet world.
Such a great story.  I know I was a bit upset that Griffon wasn't on the cover of this book like he was on the first one.  But it makes sense as I read it.  And I wasn't left unhappy with how things turned out, I was happy.  And of course, more loose ends left, so there has to be ANOTHER one!  Again, it will definitely be a staff recommendation for me at the bookstore where I work.
And finally, a picture of me with the author, C.J. Omololu at the RT Convention in May. 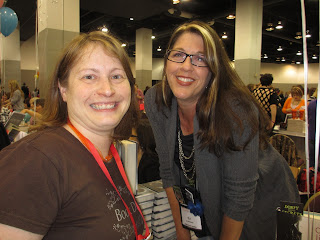