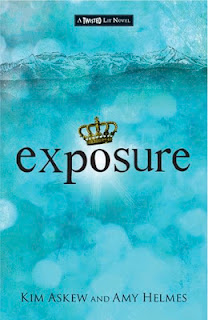 I've been intrigued by these updated takes on Shakespeare plays since I first saw them as giveaways on Goodreads.com.  I received this book as part of a trade through the YA Book Exchange, from another blogger, The Book Babe.  And it wasn't too bad!  I will admit that I've only actually read two of Shakespeare's plays, haven't even seen that many in plays or movies.  This book is supposed to be a twist on Macbeth.  So I'm familiar with a lot of the things that are kind of trivia for this one, "out damned spot", the three witches, etc.  So it was an enjoyable story, and would be interesting for a class that had read the real play to read and compare.
The main character is Skye, and she is a nerd, at least in the fact that she's quiet, and is happier being behind the scenes, which fits well with her love of photography.  However she does have a crush on the big man on campus, Craig.  Now she and Craig had been good friends when he first came to Alaska.  Then that school year, I think sophomore year, started and as Skye figured, he was so attractive that the "in crowd" immediately accepted him as one of their own, and she lost touch with him.  Not that he still doesn't talk to her when he sees her, and tries to include her by inviting her to parties and other events.  She never takes him up on it, until the one time she decides to call his bluff.  And it is like she thinks, he is very awkward once she actually accepts the invitation.  So she goes, riding with him and his cheerleader girlfriend to the party.  They play this game of flashlight tag, and while Skye hangs back, not wanting to play, she isn't having the greatest time at this party.  And during the game, Duncan, Craig's best friend, has disappeared.  They find him the next day, he'd fallen into the ice, then climbed out, and frozen to death.  Skye has a feeling that maybe Craig and his girlfriend know what happened, and even though she is not happy with Craig, she doesn't want to ruin it for him, so she keeps his secret.
A lot of the stuff from the original Macbeth is sprinkled in the details of the story, the titles of the chapters, and even lines within the dialogue.  A quick, easy read.
Posted by Lisa Mandina at 1:48 PM