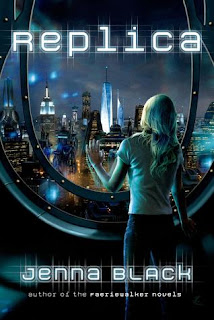 I have to thank Tor Teen for the first time for allowing me to read this e-galley in April.  I think this was one of my first downloads from Edelweiss once I finally figured out how to do it!  And what a great choice to read!  I really did enjoy this book.
At first the title seemed a bit broad for what the actual story seemed to be about.  This is a dystopian future.  The "states" are now basically governed by Corporations.  And you are either one of the Executives, or their employees, or you live in the outskirts, called The Basement.  This story takes place in New York City, or what used to be NYC.  The main character is Nadia, who is a daughter of a high level Executive.  And she is promised to marry Nate, the son of the Chairperson, the highest ranking person in their state.  The unfortunate thing for Nadia is that, even though they have grown up together and are best friends, she isn't quite Nate's "type".  Instead it is his personal servant, Kurt Bishop, who he is in love with.  Nate and Nadia intend to still go through with the marriage, even though Nadia knows it will not be a normal marriage. The book basically starts with a big fancy event.  Nate, who is a bit of the reckless playboy son of the chairman, a somewhat stereotypical character (but not in a bad way!), seems to take pleasure in doing whatever he can to shock society.  And at the party, he convinces Nadia to go outside with him alone.  As they are not married, it is kind of frowned upon, but he is able to convince her in order to save her from being with the catty girls she has been having to talk to.  Once they are outside of the party, Bishop is there.  And it seems that Nate is hoping Nadia will stay as a lookout for them as they hook up in one of the nearby rooms.  She refuses, mad that she has been put in this position, and goes back into the party.  Later that night she is woken up by her mother to hear that Nate has been murdered.  And this is where all the horror begins.
First, Nadia is accused as she was the last person anyone saw with Nate.  But she can't give away his secret about Bishop, he would have been reprogrammed.  But she knows that Nate will be replicated.  It will be his body, with all the memories that were saved from the last time he stopped by the lab.  Meanwhile the chief of security at Paxco, Dirk Mosely, is who Nadia is interviewed by when she is taken to the police.  And he is not a nice man.  He threatens her family if she doesn't tell him everything.  And when she tells all but his secret, she is now charged with spying on the replica of Nate, and even getting a bug put on him or his things somehow, so that they can try to track him back to Bishop to capture and arrest him.  Because that is who they really think murdered Nate. Possibly because he was seen running from the scene covered with blood.  Nadia doesn't want to betray Nate in this way, and like Nate's replica even protests, she also doesn't believe that Bishop would have done this, she knew the two of them were in love.  And things get worse.  There is a new servant in her house, that stays in her classes, named Dante, and Nadia is sure he is there as a spy for  Mosely.  When Nadia doesn't move as quickly as Mosely wants, or he can tell when she is lying, he actually gets physically violent, and punches her in the stomach.
Meanwhile Nate sees that Bishop took all the money he had in the safe.  And so while he figures that means that Bishop must be safely away, he doesn't want to give up on trying to find him, not only because he still loves him, but also because he doesn't remember what happened the night of his murder, and he needs to know.  Both to settle his own mind, as well as to help Nadia when he does find out what Mosely is trying to do.  And he even dares to go into The Basement alone, something that is not really safe, in his search for Bishop.
There is betrayal, and forgiveness, some attraction between Nadia and Dante, which was easy to see coming.  And at the end of the story the science behind what the title is, Replica, finally comes into the story. And it comes in a good, yet very frightening part of the story.  I won't tell you more and spoil it, just know that it was a story that I had trouble putting down.  And I'm pretty sure it must be going to have a sequel, as the epilogue left it open!  It doesn't have to I guess, it could stop there, but I'd kind of like to know what happens next.
The only drawback for me to the story/book, is  the cover.  The cover reminds me of the types of science fiction books I see when I work at the bookstore, that usually don't interest me.  But again, I have to say not to judge a book by its cover. Although the cover does really fit, so really that is just one of my own little idiosyncrasies.  This book will come out in July, so keep your eyes open for it!
Posted by Lisa Mandina at 9:00 AM