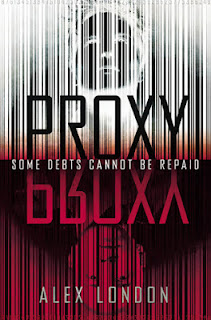 First thanks to Penguin Young Readers and Netgalley for allowing me to read an e-galley of this book.  This is a dystopian type of thriller, one for boys, with the main characters being boys.  However, and though I have no problem with it, something that might be an issue for some people is that the main character, Sydney, he is gay.  It's not really any way that could be considered "in your face", in fact it fits into the story perfectly, and really isn't much different than any other teen romance story.  Actually there really isn't anything other than a kiss or two, and those aren't even really in what you'd call really romantic settings actually, like you'd think of a romantic scene in a movie or book, not so much.  But beyond that, let's talk about the story.
As I mentioned, the main character is Sydney, or Syd as he prefers to be called.  Syd is an orphan who was brought into the city and given a chance to go to school by becoming a Proxy for one of the rich kids, or as they call them, Patrons.  What that means is that his debt will be worked off by taking the slack, the punishment for anything his Patron, who is named Knox, does wrong.  Instead of Knox getting spanked, or punished in any way really, Syd gets the punishment, Knox does have to watch though.  One main type of punishment in this world is being given shocks, I'm guessing it is basically like a cattle prod or taser type of weapon.  And Knox is basically always in trouble it seems.  At first before Syd understood why he was being punished when he hadn't done anything, he had cried.  But soon when he learned just why it was happening, that he was having to pay off his debt of living basically, he vowed not to let them see him cry.  And unlike Syd's friend Egan, Syd does nothing else to add to his debt.  Once he reaches a certain age, I think it was 17 or 18, he will be free of his debt, and have no more to do with this.  But unfortunately, his Patron has done something that will change this.  Knox gets drunk or drugged up and steals his father's car to impress a girl, Marie, and he has an accident.  When he wakes up, he finds that Marie has died, and he has to watch his Proxy, Syd, get a horrible punishment.  More of the shocks at one time than ever.  And not only that, Syd must now go to a prison/reform center, to fulfill Knox's sentence for killing the girl.  And this will go WAY past the time he was supposed to be free.  So Syd decides he must escape.  And when he is able to get away, he finds his friend Egan.  Egan has a friend who can help Syd get a fake ID so that he can hopefully get out of the city and save  his own life.  Turns out this friend is a Patron, and guess who it is, Knox.  So as he figures out who Knox is, because while Knox has had to watch him be punished, Syd has never seen Knox, he determines that he must kidnap Knox and use him as his hostage to get away.  Along their attempt to get Syd to safety they will learn that there is more to Syd's background than he knew, and that it is something very important in why Knox's day is so eager to find and catch him.  Knox will learn more about himself, enough to maybe grow up a little.  Egan will come back to help them with their getaway.  And the end it kind of about redemption in a way.
While I believe that they can still go on with the story, I think that it also ended in a way that it doesn't have to go on, and that is kind of nice.  The ending reminded me of the Star Trek Movie where Spock and Kirk talk about how the needs of the many outweigh the needs of the few or vice-versa.  I also was really ready for Egan to betray Syd at the end from the way Syd had described Egan's need to get as much tech, or "lux" things as they described them in the book.  But I was pleasantly surprised that although Egan made some bad choices, he truly seemed to be the friend Syd thought he was until the end.  Definitely a fun story, with some great ideas about how to save a system of debt like this society in the story is made up of.
Posted by Lisa Mandina at 4:49 PM