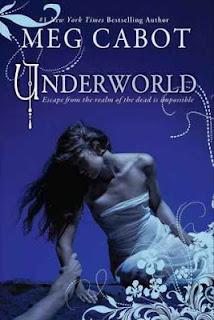 I actually received this book from the YA Book Exchange website.  It came from Sri Lanka, so took a little longer than expected to arrive.  But fortunately I got it in time to get it read before my e-galley of the final book in the trilogy, Awaken, expires.  And you can check out my review of the first book in the trilogy, Abandon, HERE.
In book 2, we begin with Pierce down in the Underworld with John.  He brought her here to keep her safe from the Furies, one of which had possessed her grandmother.  But Pierce isn't sure if she wants to stay there and have to leave her family forever.  When John offers her breakfast she eats, not realizing that the myth of Persephone eating a pomegranate and being stuck there wasn't quite correct.  According to John, it is any food, and so unknowingly she has now made it so that she has to stay.  But she is worried about what might happen to her family while she is gone, and what will they think about her going missing?  And then the weirdest thing happens, when she finds her backpack, somehow her cell phone is working!  Well, kind of.  It keeps showing her a video of her cousin Alex trapped in a coffin and screaming for help as he runs out of air.  So she tries to find John to convince him to take her back to the surface to save her cousin.  Along the way she meets some of his "friends" or as they used to be, his shipmates.  See John used to be part of a ship's crew.  And some of them ended up with him, helping him get the newly dead on their way to wherever it is they are going in the afterlife.  So, seeing the video of Alex, John gives in and takes Pierce back to try to save her cousin.  Going back isn't as easy as she'd hoped.  The Furies are still looking for her, and what Pierce saw on the phone hasn't happened yet.  So they have to try to convince Alex not to do whatever revenge plan he has.  There are also some other subplots that really tie into the story, as well as helping Pierce learn more about John and who he really is/was.
It kind of started a bit slow, but once they got back to town and started interacting with Pierce's family and learning all the stuff about John's past and the town's past, it got really good.  And now I'm very anxious to read my e-galley of the 3rd book.  Now because the book I got was actually published outside of America, I have to share what the cover of the book I actually have looks like below.  And, while we're at it, I also want to show my picture from when I met Meg Cabot and got the first book in the series.