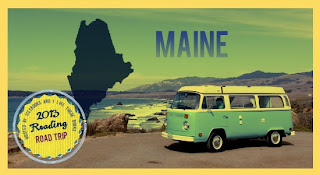 Welcome to Day 1 of the 2013 Reading Road Trip Hop which is being hosted by I Like These Books and IceyBooks.  While I was disappointed to not be able to get the state that I live in (Missouri) or the one that I'm getting ready to start teaching in because it is right next door (Kansas), I was excited to get Maine, as one of my favorite authors of all time, Stephen King, lives there, and sets most of his books there.  The flag: 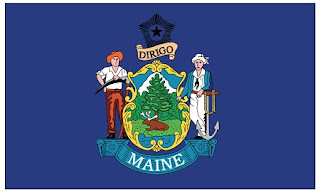 And I'm sure you know that Maine lobsters are pretty popular as well!  Some famous people from Maine besides Stephen King are:
For my giveaway, which you will have till the end of the month to enter, you may pick one of the books I've listed below.  These are books that either take place in Maine, or are by an author from Maine.  My giveaway is International, as long as The Book Depository ships to you.

Fill out the Rafflecopter below to enter.  There are no mandatory entries, in fact the first one is free!  You may choose to follow my blog or any of the other choices for more entries though.  And when you're done filling it out, you can click on the button on the sidebar to go to the other stops on the tour.