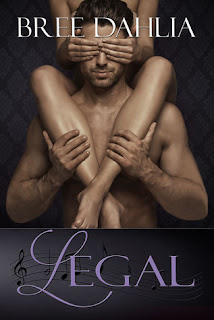 Blurb:
Taboo. Wrong. Off limits.
I know the drill. I know the rules.
But damn, if he doesn’t get under my skin.
And into my bed.

There’s no reason for a woman like me,
Successful, established, independent,
To ever be sleeping with a younger man.
A younger man with a hard, rugged, sculptured body.
A body that can go all night.
All night.

I can’t resist, can’t turn him down.
Can’t walk away.
Because I’ve never known pleasure like this.
Chase Nolan walked into my life and disrupted my perfect little world.
And made it so much better.

Enjoy it while you can, Jillian.
Because there’s no way there’s a future for us.
After all, is he barely even legal?

My Review:
First I have to say thanks to Xpresso book tours for allowing me to read a review copy of this book.  I really ended up enjoying it a lot!  The story was great, the sex scenes were really hot, and I really loved the characters.

I was first drawn to the story because it is about an older woman with a younger man, and I personally like younger men.  So that made the story fun for me.  And man, Chase sounded like a total  hottie!  The first night when they met and had their "one-night stand", wow, that was really sexy and mind-blowing.  Perry is the main character Jillian's best friend, as well as Jillian's brother's girlfriend.  And while I adore Perry, and what a great friend she is, not to mention how snarky and fun she is, if she was my friend?  And she kept putting me in the awkward situations of running into the guy I didn't want to see, or protested that I didn't want to see, well, she and I would have some major words!  Now yeah, I know it was really all for the best, as Chase and Jillian totally belong together.  But still, I was so ready to slap Perry for Jillian!

While I also understood all the reasons Jillian didn't want to have an actual "relationship" beyond friends with benefits with this guy who was 15 years younger than she was, at a certain point her stubbornness just got ridiculous. To the point for me, that even if it was part of the conflict/suspense of the story, I marked it down from a 5 star to a 4 star book.  Or maybe it is a 4.5 star rating for me. Because I really did enjoy this book.  When I would start reading it, it was really hard to stop to do anything else, like work, go to sleep, etc.  I did like the way the author did a last chapter from Chase's viewpoint, and it left me hoping for a sequel.

Grab this book for a fun, sexy read!
Posted by Lisa Mandina at 6:30 AM