Review: His Every Need (Beauty and the Brit #1) by Terri L. Austin 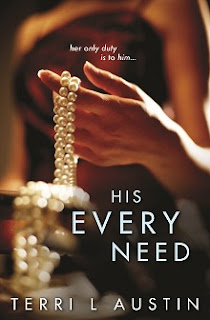 I didn't realize that the book, His Kind of Trouble, was part of a series, and not the first one in the series, until of course I looked on Goodreads.   But, I wanted to read the first story because it was the story of that character, Monica's older sister Allie.  Now, in that book, I didn't like Allie.  She seemed like a mean older sister.  So as I read this one, I went into it not knowing how I'd feel.  But Allie's story definitely changed my mind on her, and made me see her side against Monica.  This first book made you not as big a fan of Monica's.  So it was definitely an interesting way to see characters and how they see the people around themselves.

This story is how Allie tries to save her father's house from the rich man who has won it from her father.  His name is Trevor, and Allie decides to go beg him for the house back, telling him all about it has been her family's house since their mother died, and that it is all they have left.  Allie has to be the adult in the family now, her dad is not much help.  Allie notices that Trevor seems to find her physically attractive and so she offers him anything he wants if he will just let them keep the house.  They set up a contract and he makes her move in with him.  She then has to make her family think that she is just working for him as a personal assistant.  But while she's gone one of her younger sisters, Monica, really starts rebelling and even runs away to live with her boyfriend.  The youngest sister, Brynn, ends up feeling almost deserted and horrified when their dad starts dating someone who works at her school.

Of course Trevor comes from a bad family background, and as things between him and Allie start to get more friendly and make the relationship to be more of an actual relationship, his parents show up.  And they are going to get remarried, to each other.  Trevor can't stand dealing with them and is fed up with them just barging into his life and wanting to try to "make it up to him" all that they ruined when he was a child.  Of course this leads to a backslide in the relationship between Trevor and Allie.  Trevor will set a detective out to find this boyfriend of Monica's and try to find where they've been holing up.

Of course as I'd already read the second book, I already know how it's going to end for the most part. And as it is a romance, you can probably guess it will be a HEA ending as well.  It definitely has its steamy parts, just like the second book.  And I loved that Trevor was British, who doesn't love a sexy British guy?  A good read, and I'm now going to have to get a hold of the third book, His to Keep, and get Brynn's story when she is grown up.
Posted by Lisa Mandina at 7:00 AM