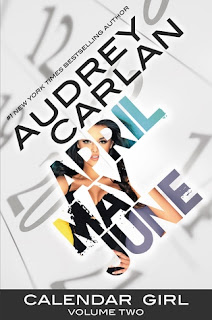 Now, I didn't enjoy the first story in this as much as the first book, but then the second story totally brought me back. The third story wasn't great to begin with, but it had an ending that really was intense and made me very eager to get ahold of Volume 3.  If you haven't read the first volume which covered January, February, and March, you can go read my review of that HERE.

The book starts off in April when Mia is going to spend the month with a professional baseball player.  Now, I was pretty excited about this, as baseball players are probably my favorite athletes, but the story didn't end up the way you'd think.  She starts off in Boston and is supposed to portray a normal "girlfriend" for Mason Murphy, who is considered quite the man-whore. But in order to get some sponsors, he needs to tone his image down.  So Mia is hired by a PR person for Mason named Rachel. But when she gets there, she can see that Rachel actually kind of likes Mason, except for his slutty ways.  And really, Mia can also tell that Mason kinda likes Rachel.  So while Mia does the public image thing for Mason, she works to be a matchmaker for the two in the background.  She misses Wes, the guy from January, but she knew that she had to tell him not to wait, because she had to complete this year in order to get the money she needed to pay off the people her father owed.  Unfortunately he does take her up on this, as she sees gossip magazine pictures of him with a famous actress, who even answers his phone when Mia tries to call him one time.

May is a much better month.  Mia gets to go to Hawaii to be a model, and even better, she gets to take her best friend Ginelle, and her younger sister Maddy with her!  But there are things going on at home.  Maddy has a new boyfriend, and it seems to be pretty serious.  Mia is worried about her sister, but when she is invited to meet with Maddy's boyfriend Matt's parents for dinner, she at least gets to see that they are good people and that they really care about Maddy.  And it does give Mia a bit of relief about leaving Maddy alone while she is off earning money. But back to Hawaii.  Her first day she meets a Samoan model named Tai.  Now, of course, what I picture is a very large guy, and he is described that way, but I have to say that I'm guessing he's not what I'm thinking of, not large in a fat way, but just large as a man overall.  Mia's still feeling a bit jealous about Wes, even though she knows it isn't fair to him.  And so she and Tai have a lot of fun.  And the sex, let's just say the sex this month for Mia is pretty darn intense.  Extremely insane!  To the point that she even passes out from it one time.  Tai is a big boy in every way.  Now she knows according to one of his family members that Mia will not be the forever girl for him, and before Mia leaves, she may have to try to do a little matchmaking for him again when the right girl does show up.  But as with all of the guys so far, she leaves with him as a best friend.

The final month in the book, June, Mia is sent to Washington D.C. to pose as the girlfriend of an older wealthy man, who is the father of a young, attractive Senator.  She knows right away that the man, Warren, isn't interested in her for sex, he just needs the "arm candy" to impress the other men who do the same.  It turns out that once again there is already someone else in his life, someone that he cares about, and has ever since his wife, the mother of his son Aaron the senator, passed away.  At first Mia does flirt with Aaron a little bit.  But soon, while Mia does her best to help Warren in business with the schmoozing, Aaron turns into a bit of a pervert.  Walking into her room while she's asleep and having a very erotic dream about Wes, Aaron decides he is going to join her in bed, that her being naked and moaning in her sleep means she wants someone to take care of that.  Later one when Aaron finds out about the romance between his father and this other woman, it sends Aaron a little bit over the edge, and he really comes after Mia.  Fortunately Mia has friends who will be there in her time of need, even when things get to a pretty scary part.

We get a tiny excerpt for July, knowing that Mia will be going to be in a video for a Latin rapper.  I will be interested to see where the story goes next.  And of course I need to know how things will move forward with Wes, as the two of them have to keep things the way they are so that Mia can finish her year of earning money.
Posted by Lisa Mandina at 7:00 AM