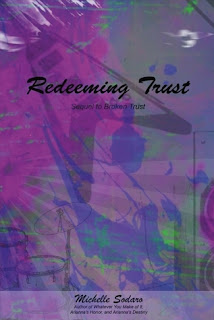 This is the sequel to the book Broken Trust, that I read and reviewed earlier this year.  You can read my review of it by clicking on the title linked in the book info above.  I was definitely ready to read and find out just where the author was going to take the dynamic character of Ali from the first book, and her attraction to Officer Biceps.

So this book still has the two characters, Sam and Ben, from the first book. Ben is Ali's brother, and he is getting ready to marry Sam.  One neat thing I liked in this book was that the author added a little bonus prequel novella, giving us the story of when Sam and Ali actually met for the first time, before the meeting at the beginning of Broken Trust.  Turns out that Sam was doing caricatures at the Renaissance Festival one time when she saw this very bright, spunky girl named Ali.  The two women didn't cross paths again until the first book.  Now things are going well for Sam and Ben.  So book two is supposed to be Ali's story.  And we have another main character, her love interest, Officer Biceps, otherwise known as Lieutenant Vincent Michaels.

This story begins with a break-in and some graffiti at Ali's music store AliCat Records.  Vincent gets called in to the crime scene, and of course ends up on the case.  They're trying to find out who could be the one that broke in, and the spray painting gives a hint, something about always loving Ali?  So at that point, it seems as if maybe it was a kind of stalkerish guy that Ali had almost dated at one time.  Ali doesn't really date guys for too long, she's always been kind of a love in the moment person, not wanting to get too serious.  This is partly because of seeing what happened with her grandparents, when her grandmother died, and how it changed her grandfather.  So this is the main theme of the story, finding out who could be causing the trouble for or possibly be after Ali.    But we also have a pretty big part of the story that is still Ben and Sam.  It makes sense, as Ali was a big part of their story. But we're dealing with Ben and Sam preparing to get married, working on Ben's dream of opening his home for runaways, as well as other family issues that will pop up.

Now while Vincent may sound like he is going to be perfect, he has his own issues.  One being that he is kind of taking care of his sister's son Lucas, while she is in rehab or off in her own world.  Ali also worries that a man like Vincent, someone who has dedicated his life to upholding the rules/laws, will not want to be with her, or at least not unless she would tone herself down, and become more "normal".  Times where he has been a gentleman, and not taken advantage of situations that were emotional, well she felt he was rejecting her, and so does not know if he really wants her.  So you have that conflict in their relationship as well.

I won't tell you any more, you should read and find it all out yourself.

The story is a good one.  The characters are all pretty good as well.  As with the last book, there was a lot of potential in the story.  And I love the Kansas City setting, being as that is where I live, and have lived my whole life!

Unfortunately I still had some of my normal independently published book issues.  At first there was just the occasional type/grammar issue, that probably was just from not having several people do a good edit.  But at the end of the book, I'm guessing that the author was just really excited to get it finished and published, and possibly the editor was too into the story to catch things.  But there were several pages that had at least one error for either every other, or every paragraph.  Little things, such as "he" instead of "she", or other similar words that were real words, they just weren't spelled correctly or used grammatically correctly.  Again, while I figure that it was probably just due to rushing to get finished, at one point I almost wondered if something was happening in the final publishing program that cut letters off?

I also had a little bit of trouble with some descriptions or words used to describe that felt like they were being used over and over.  I just found myself thinking, yeah, I get that already.

Other than the little errors like typos that I mentioned above, the book definitely overcame the problems I was having by the end for the most part.

While you're here, this is the first book that goes toward fulfilling my September is for Sequels Challenge that I'm hosting.  You can still sign up before the 15th, this Thursday.  Go check it out HERE.
Posted by Lisa Mandina at 7:00 AM