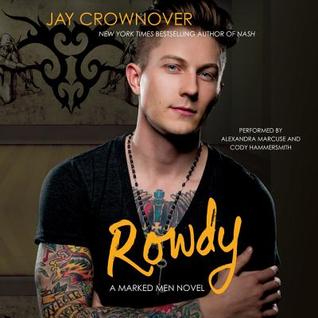 Now, Rowdy is the guy who sounded in looks the most like he would be my type.  Not to mention that his style of tattooing that was described makes him the guy I'd want to do my tattoos if he was real.  What was even more fun about listening to this book was that I was driving out to Colorado for my little mini-vacation, and of course the whole story takes place in Denver.  As with all of the books in the series, you can of course read any of them without reading the others in order.  But all the characters are interconnected in some way, and I loved that in this book we got to meet a few new ones that I know are in the new Saints of Denver series that I now can't wait to read!

Of course Rowdy is our male main character, and the female main character for this book is Salem.  We learn about Rowdy's past, that he'd lost his mother at a young age and been in foster care.  It was the family he lived with where he met Salem and her younger sister. Salem's father was a minister, and very strict with his family.  But Salem was always one that wanted to break out and be different, and so when she turned 18 and ran away, she did go a bit crazy.  So now she's basically a pin-up looking girl, one that Nash's dad called in to work at the  new tattoo shop.  And it seems he did it on purpose, to get Rowdy and Salem together and reunite them.  You see, Phil had once done a tattoo for Salem, and she had told him all about her past, which gave him the connection to Rowdy.  Salem's younger sister was supposedly the love of Rowdy's life.  He'd asked her to marry him, and she'd said no.

Salem had always liked Rowdy a little herself.  And the hardest thing for her to leave home, was leaving Rowdy behind.  She'd always thought about him.  And now she wanted to prove to him that she was what he needed.  But at first he didn't want to be with her. When she left him, it made him so mad at her.  But soon, he'll figure out that they should at least be friends.  And with the friendship comes all the attraction they feel too.  But of course as things get better, ghosts from the past, Salem's sister, Poppy, will show up to throw a wrench into things.  Not necessarily in the way you might think, although partly.  And then, there is something else from Rowdy's family's past that will really be a surprise.

I really did like this book too, as I've loved all of them I guess you could say.  I loved the fact that Rowdy used to be a college football player!  Never would have guessed it. And Salem gets a puppy, love that puppy!  Once again the author has left a tie-in to the next book at the end of the story, not that you'd have to read this one to go on to the next one, but it makes you anxious for the next book when you read this one.  I also have realized that this series has made me look up different types of piercings, and so means that I need to make sure to clear my browser history just in case.  :-)  I am so ready for NOLA Story Con in September when I get to go meet the author!
Posted by Lisa Mandina at 7:00 AM